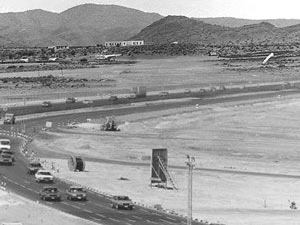 The history of Sharjah begins 5000 years ago when it was one of the wealthiest civilizations of the Gulf region, originally called Sarcoa. Trade was conducted through farming, hunting, fishing and peal farming. During the 16th century the Portuguese conquered the area to control the spice trade; the fort at Khor Fakkan, Kalba and Dibba were built during that era, with the Dutch then trying to take over. In the 17th century the British arrived and began trading with Qawasim, the founding fathers of the present ruling family however the relationship between them deteriorated during the 18th century for attacks between parties. In the year 1820, the first of many peace treaties was signed to confirm peace and protection from British attacks for the next 150 years. The coast was then known as the Oman Peaceful Coast and Sheikhdoms of Oman as reconciled countries. These names would remain until the formation of the United Arab Emirates in 1971 which also ended the British presence in Sharjah. On 2nd December 1972, Sharjah became part of the UAE as a founding member; his Highness Dr. Sultan bin Mohammed Al Qasimi succeeded as the ruler of Sharjah in 1972. In the same year oil was discovered which led to a new era of prosperity for the region.