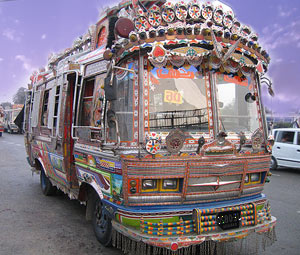 Buses are the primary mode of travelling around Karachi. They are conveniently cheap and are thus used by the majority of the middle and lower class commuters. However, the present number of buses is simply not enough to cater to the commuting needs of the ever-growing population, and so it is not an uncommon sight to experience overcrowded and cramped conditions inside the buses, as well as people clinging to the sides of the bus and huddled together on the bus roofs.

There are a lot of bus routes all throughout the city. What lacks is the availability of bus stops. The bus stops designated by the transport authorities are often not given due regard by the bus drivers, who usually stop and go at their own will. The plus side: you are saved the trouble of walking to a particular spot to catch a bus, and you can simply stand in the middle of the road to hail one.

Tickets do not exist. You just have to pay the fare to the conductor of the bus and hope he remembers your face for the length of the journey. He usually does.

The majority of the buses run from around 0630 in the morning to around 2230 at night.

The main types of buses in Karachi are the small, yellow wagons, the elegantly decorated minibuses, and the old, traditional big buses.

The small yellow wagons are similar to private vans, with a seating space for two to three women next to the driver. Men are seated at the back. Fares range from Rs 6 to 10.

The minibuses are the pride of Karachi. The fares are quite reasonable (Rs 5 to 12 depending on the distance you wish to go), but you would usually not get a seat if you travel during the peak hours and would have to stand inside, which is quite an uncomfortable experience, especially during the summers. But if you fancy, you may climb onto the roof of the bus for a free sightseeing tour of the city. Another advantage of being on the rooftop is that you are spared the weird variety of heartpounding music which all minibus drivers love to play. But wherever you sit (or stand), be sure you have a firm grip, as minibuses can be dangerously speedy. This is largely because the minibus drivers love to race - they are like unacknowledged pro street racers, and a mere smirk from a fellow driver can spark off a NASCAR championship.

The 'big' buses, as the name implies, are much larger. They have a considerable seating capacity of around 40 people, and you can usually find a seat in such buses. Their fares are a bit lower (Rs 6 to 9), and they also offer a 50% discount for students on a display of ID cards. However, they are usually not in a very enviable condition and a ride in one is generally not everybody's idea of a joyride.

A pleasant addition by the government to the transport system of Karachi is the introduction of even larger buses.These are Green Buses and UTS buses. Clean, safe, and comfortable, but with a considerably higher fare (Rs 10 to 20) and actual tickets, they provide a much more convenient travelling experience. 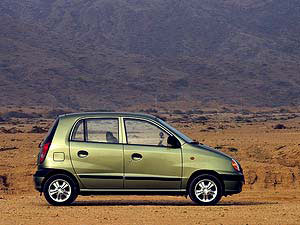 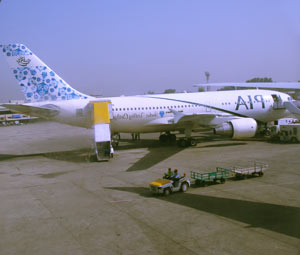 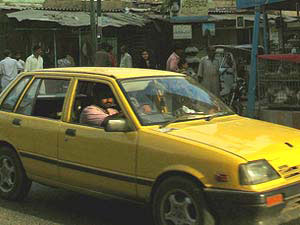