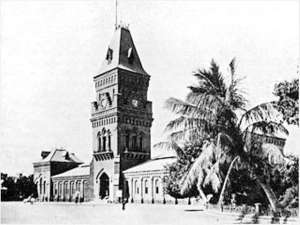 Karachi is a city which has attracted settlers from a very early time. Its roots lie in the Indus Valley Civilization which flourished on the banks of the mighty River Indus and its delta, which passes through Karachi and the adjoining areas.

During the 6th century BC, Persian conquerors settled in the region where Karachi exists today . Alexander the Great captured the region in 326 BC, and founded cities along the River Indus, some of which exist even today. Karachi was known as 'Barbarikon' during the Indo-Greek period. When the Greeks left, the region fell to the Mauryan dynasty, who were in charge for quite some time before a Brahmin emperor took over in 622 AD. Almost a century later, in 711 AD, Muhammad bin Qasim led a successful Muslim attack against the cruel ruler Dahir of Sindh, paving the way for the introduction of Islam in the  Indian subcontinent.

The origin of the name of Karachi has many popular myths attached to it, but the most likely one describes an old fisherwoman by the name of 'Mai Kolachi' who had settled there. The village soon came to be known as 'Kolachi jo Goth' (literally meaning 'the village of Kolachi'), which, through various transformations over the years, finally evolved into 'Karachi'.

Karachi was owned by the the Khan of Kalat and passed into the hands of the Talpur Amirs of Baluchistan in 1789. They erected a small fort at Manora. By 1815 the town began to attract small fishermen communities.On the first of February, 1839, a British vessel, HMS Wellesley, anchored off the coast of Manora. By the third, the fort at Manora had surrendered without firing a single shot. The British, after assuming authority, began developing Karachi as a major port and city. By 1847, Karachi was a bustling town of 50 000 souls. Infrastructure provision and general construction were on the rise, major roads were built, and rail connections were made to other prominent cities. Buildings such as the Frere Hall, the Holy Trinity Church, the Sindh Assembly Building, and the majestic Empress Market all added to the glory of Karachi.  Karachi became the capital of Pakistan when the nation was founded in 1947, but the capital was later shifted to Islamabad in 1959.