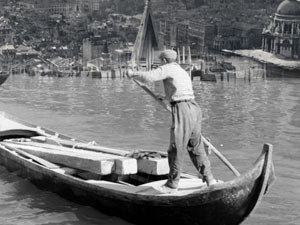 The first settlers of Venice arrived on the islands during the A.D. 400s to escape barbarians who were invading Italy from northern Europe. Fishing and trading was the basis of early Venetian economy and they traveled along the Adriatic coasts in search of new  markets. By the 800s, Venice was trading with Constantinople now Istanbul and cities on the Italian mainland and northern coast of Africa. Gradually Venice transformed into an independent city-state ruled by nobles.

Venetian ships provided transportation for the fourth Crusade 1202 which lasted for two years. The Venetians joined the crusaders in battle and conquered the Byzantine Empire, including Constantinople. The growing strength of Venice led the city into a series of wars with Genoa, a rival sea power. Venice finally defeated Genoa in 1380 and gained control over trade in the eastern Mediterranean Sea. Venice reached the height of its power during 1400s when its colonial empire included Crete, Cyprus, the Dalmatian coast now part of Yogosulavia and part of northeastern Italy. Venetian ships carried almost all silks, spices and other luxury items that reached Europe from Asia. Venice became a leading centre of Renaissance art in the late 1400s and 1500s. In the later 1400s Christopher Columbus journeyed to America and Vasco da Gama discovered a sea route to India. The centre of trade in Europe then shifted to the Atlantic Ocean and Venices power then declined. The city gradually lost its eastern colonies to the Turks.

In 1797 French forces led by Nepolean Bonaparte occupied Venice. Nepolean divided what was left of the Venetian empire between France and Austria. The city itself came under Austrian control. In 1866, Venice became part of the independent Kingdom of Italy.
The industrialization of Marghera and Mestre began in the early 1900s. During World War II, German troops took over the city. Allied planes bombed the port at Marghera but spared Venice’s islands.

In 1966 a disastrous flood that struck much of Italy caused millions of dollars in damage in Venice. The flood badly damaged or destroyed many of the city’s paintings and statues. International organizations and private citizens donated money to help the Italian government pay the repair costs. Following the flood, government committees and private researchers began studies on pollution control. During the mid 70s the Italian government took steps to restore many of the city’s ancient structures damaged by floodwaters and pollution.