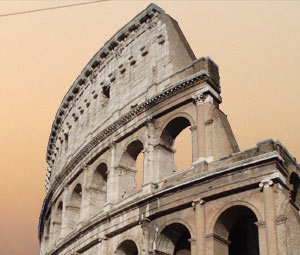 According to legend, Rome was founded in 753 by Romulus and Remus, the twin sons of the priestess Rhea Silvia who were ordered to death by exposure by Amelius, brother of their grandfather. Fortunately they were saved and brought up by a she-wolf. When they grew older, the twins founded their own city. A quarrel ensued between the brothers as to who would rule, which resulted in Romulus killing Remus. The city takes its name from Romulus. The city of Rome grew out of a number of settlements that existed around seven hills that were near the river Tiber. It was governed by the seven kings of Rome. Rome became a world power and emerged as an empire with extensive boundaries. It thrived as a centre of culture, art and entertainment, architecture, commerce, science and technology. The city had a vast number of majestic buildings like the Coliseum, the Pantheon and the Forum of Trajan .The Roman Forum was the central area around which Rome developed, and served as a hub for daily Roman life. Here courts were in session and great Senate orators met and argued. Life in the city was always lively with something for everyone to do .There were many religious festivals to honour the various gods, and they were publicly celebrated with entertainment being paid for by the rich. Chariot racing and other events were free spectacles that all people could enjoy.