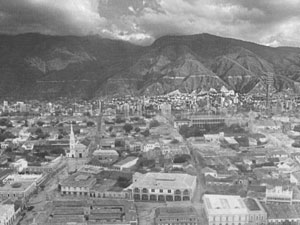 Caracas during the Middle Ages was little more than a small village in a beautiful valley occupied by indigenous tribes. The towering Mount Avila to the north of the settlement created a natural barrier that protected the city from the Caribbean Sea. Hence it remained out of sight from the prying eyes of the European navies that sailed along the coasts of the region on the lookout for local towns to plunder and add as colonies to their respective crowns. However, this did not hinder interaction between merchant navies and the locals. Traders often frequented the village for its rich cocoa, medicinal herbs, and other local products.

In 1562, Francisco Fajardo, a sailor of Spanish-Guaiqueri origin who had established several small settlements along the South American coast, tried to set up agricultural plantations for the crown in the region. This was instantly seen as a possible means of invading local traditions of farming, and the estate was soon destroyed by the locals. Some little skirmishes followed afterwards, but on 25th July 1967, the Spanish Captain Diego de Losada established the city as a territory under the Spanish crown. It was named as Santiago de León de Caracas.

Formal city planning rapidly came into play as the Spanish moved in. By 1578, the city was centered on a public piazza, surrounded by 24 equal quadrilaterals. Linear streets were developed, covered by a layer of rounded cobblestones, and the first blends of Medieval European architecture with traditional construction materials of wood and adobe became evident. Private housing for the elite, complete with patios, arcades, and quarters for servants and horses, began springing up. Development then proceeded along the main east-west axis, which still forms the spine of the city’s networks today.

In the 16th and 17th centuries, during the Golden Age of piracy, the city remained comparatively out of sight of marauding pirates and opportunist bounty hunters. Apart from an attack by English buccaneers in 1595, Caracas remained a fairly safe haven for traders and new settlers.

For these reasons, and a steadily increasing cultivation of cocoa, Caracas soon emerged as the capital city of the region in 1777. A major outbreak of smallpox quickly wiped out the native Indian population, decreasing the chances of a rebellion. However, there were still attempts to gain independence from the Spaniards. Manuel Gual and José María España assembled an organized army that was defeated on 13th July 1797. On 5th July 1811, following the ideals of the Wars of Independence in North America and the French Revolution, officials signed the Declaration of Independence that was to shape the future of Caracas.

Caracas also gave birth to Simón Bolívar, who is regarded as a pioneer in the rebellions against the Spanish crown. He led the local population to a crucial victory against the aristocracy at the Battle of Carabobo, on 24th June 1821. Today, monuments, streets, and even the currency in Venezuela are named in his honor.