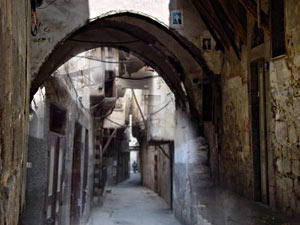 Inhabited since 10,000 B.C., Damascus is one of the world's most ancient cities, boasting a very colorful history. The city was conquered by Alexander the Great, and after his death it was annexed by the Roman general, Pompey. The Romans built a great deal of the infrastructure of the city. St. Paul and St. Thomas both lived in the quarters developed by the Romans in Damascus. Damascus was first conquered by the Muslims in 634 by the Rashidun Caliph. It soon became the capital of the Omayyad Empire and later was ruled from Baghdad during the Abbassid caliphate. It was also ruled by the Fatimid caliph. The Muslims left an indelible mark on the architecture of Damascus, which is clearly seen today. Damascus was also ruled by the Seljuks and then by the Turks. Ultimately it was inherited by Saladin of Egypt, famed for rebuilding the citadel and his role in leading the Muslims during the Crusades. Damascus then came under the Ayyubid and Mamluk rule. During the latter period, the plague claimed the lives of half of the city’s population. Damascus was also an important province of the Ottomon Empire for 400 years at least. In 1920 the French were given a mandate over Damascus and in 1925 they were able to suppress the Druze revolt, bombing and shelling the city during the process. In 1945 the French once again bombed Damascus which the Allies had wrested from them, but this time the British forces intervened and Syria gained independence in 1946.