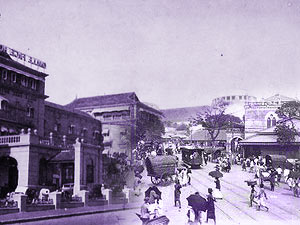 Originally known as "Kolon Thota" (port on the river Kelani), it is said that Colombo also got its name via "Kola Amba Thota" which means 'harbor with leafy mango trees' in Sinhala.
Colombo at one point was a seaport used by Arab, Moor, Chinese and Persian ships due to its strategic position along the East-West sea trade routes and is believed to have been used by traders even 2000 years ago.
The conquest of Colombo by the Portuguese was achieved in 1505, but it ended in 1656 when the Dutch invaded and captured the city.  With the British exploring and extending its international boundaries, Colombo fell to British hands in 1796 and was made the capital in 1815. Colombo remained the capital following its independence in 1948. However in 1978, Colombo was declared the commercial capital of Sri Lanka, when the administrative and state functions were transferred to Sri Jayawardenepura Kotte.