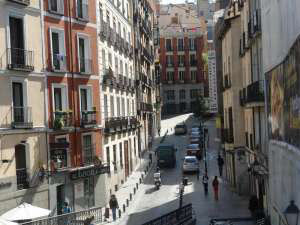 The history of Madrid dates back to the 9th century A.D. with mostly Muslims conquering the peninsula. A location was chosen by the Arabs to settle here that has Royal Palace standing there now. The city with its abundance of natural springs was earlier nicknamed as 'Mayrit' or 'Magerit',  meaning 'place of many springs' by the Arabs.

The Christians took over the city during 11th and 16th century and the town came under the management of Christians, however the city largely benefited by developments made by Muslims.

The most thriving period known in the history of Madrid is the late 16th and 17th century when Phillip II chose the spot to place his court in 1561. In a short period of time, the town developed rapidly and attracted many outsiders to settle here. The population tripled over the next 40 years.

The period from the 18th to the 19th century saw the emergence of Madrid under the guidance of King Charles III that led Madrid to be at par with other European capitals.
In 1808 Napoleon appointed his brother, Joseph Bonaparte as the ruler of Spain, however the general public revolted and it lead to a radical change.

From 1814 onwards up to 1936 when the civil war broke up, the history of Madrid is marked with frequent instability. In 1898, Spain lost Cuba and by 1920s it experienced Great Depression and suffered an economic mayhem.
Francisco Franco's dictatorship surfaced in 1939 and lasted till 1975 when eventually he died and finally the modern Madrid emerged.

The historical flavor of the city can be experienced by visiting some of the key landmarks including The Royal Palace and Almudena's Cathedral. The major art museums, the Prado, the Reina Sofi­a and the Thyssen unfold many aspects of the history of this city.