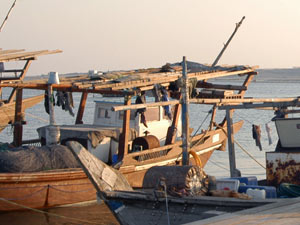 The Qatari Peninsula has been settled by various civilizations for millenia.  Modern Doha was the site of a small fishing village known as Al-Bida prior to 1825.  When the first Al Thani sheikh took control of Qatar, he made Doha its capital.  The name Doha means 'big tree', and refers to a large tree that stood in the original village.  Qatar earned its autonomy in wars with Bahrain in the 1860s and the Ottoman Empire in the 1880s.  Two majestic sites dating back to this period include the Al Wajbah and Doha fortresses.

Little else survives from this period, though.  In 1916 Qatar became a British Protectorate, with Doha as capital.  The city became a hub of the fishing and pearl industries, as well as a minor regional port.  In the 1930s and 1940s oil was discovered, changing the city's fortunes forever.  The ruling Al Thani family used the newfound wealth to modernize Doha and the rest of the country.  Much of the city's heritage was lost during this period.  Few of the low-rise mud and coral homes with their distinctive wind towers remain.

Beginning in the 1970s, more effort was put into making Qatar a competitor on the world stage.  The port was dredged, allowing larger ships to enter.  The University of Qatar was opened in 1973.  More social programs were put in place to improve the lives of ordinary Qataris.  Al Jazeera began broadcasting from Doha in 1996.
Gleaming new towers have sprung up all over the city, and the population has grown exponentially.  Like many of the world's cities, Doha has suffered due to the recent recession, but with its massive natural gas reserves is positioned strongly for the future.