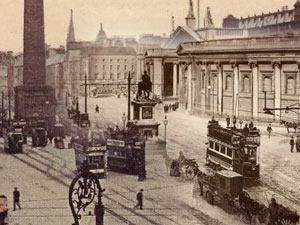 The first mention of Dublin in history books date back to 140AD, when the Roman astronomer Ptolemy wrote about an ancient Irish settlement known as Eblana.  Modern Dublin dates back to the the mid-ninth century as a Viking settlement known as Dubh Linn (meaning 'black pool').  The Vikings controlled the area for three hundred years, until the Norman invasion in 1169.

The invasion lasted two years.  In 1171, English King Henry II landed in Ireland, the first English king to do so, and proclaimed Dublin a Royal City.  Initially, this was viewed as a positive by the native Irish, as the appointed governors were given plenty of leeway.  During this time, medieval Dublin was a densely populated city, with around five to ten thousand residents.  Consequently, the Black Plague
ravaged the city in 1348, and continued periodically until the 17th century.

Irish autonomy came to an abrupt end under the Tudor dynasty and Henry VIII.  In 1541, the Irish Parliament created the Kingdom of Ireland, effectively handing direct control to the English monarch.  The newly converted English tried to stuff Protestantism down Catholic Ireland's throats.  Trinity College was opened in Dublin for protestants in 1592.  More and more Anglicans moved in over the next hundred years.  When Oliver Cromwell invaded Ireland in the 1650s, all Catholics were expelled from Dublin and its immediate surroundings.

The rest of Ireland was beset with conflict, but Dublin prospered.  It became the second largest city in the British Empire at the start of the 18th century, with a population of more than 60,000.  Grand new buildings were erected, and the narrow medieval streets were replaced with wide avenues.  Much of the city's historic architecture dates from this period.  By 1800, the city's population was rapidly approaching 200,000 and an Irish Nationalist movement began to gain steam.  The formerly English elites had been living here for generations, and no longer felt allegiance to the British Empire.

The nationalists gained control of Dublin's government and Parliament.  In 1829, wealthy Catholics were granted British citizenship.  Meanwhile Dublin continued to grow.  At the start of the 20th century, the population was nearly half a million, most of whom were desperately poor and packed into unsanitary tenements.  British control grew ever more tenuous.  On Easter 1916 Dublin burst into conflict, as 1,250 Republicans declared independence and began fighting the British.  It was brutally put down, damaging much of the city's core and putting independence off for a couple more years.

In December 1918, the Republican Sinn Fein party won a majority in Irish Parliament and once again declared a new Irish Republic.  This precipitated the Irish War of Independence.  The newly created Irish Republican Army (IRA) waged a guerilla campaign against the British army, bringing death, destruction, and misery to Dublin.  Over the next five years, many of Dublin's finest buildings were destroyed in the fighting, including the Custom House and the Four Courts.  But Ireland finally gained full independence on December 6, 1922.

The intervening years have seen Dublin emerge as a world class city.  Since Ireland was neutral during World War II, Dublin largely escaped damage, aside from one German bombing raid.  Many of the city's tenements were demolished (though unfortunately so were many of its beautiful Georgian buildings) in the following decades, making the city more livable.

Some fighting has continued, with periodic bombings, but Dublin has largely escaped the conflict that beset the rest of the island.  In recent years, the 'Celtic Tiger' Irish economy has turned Dublin into one of Europe's most popular destinations.  Unfortunately, it also made it vulnerable to the recent economic downturn and today Ireland's economy is in a perilous state.  But compared to what Dublin and the rest of Ireland have faced over the years, this is just a small bump in the road.