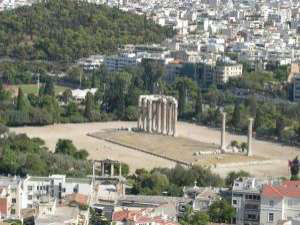 Athens is truly a historical city- it has existed for the last 3000 years and still fascinates many. Ancient Greece strikes up in one's imagination the vivid imagery associated with Greek mythology, that of  tales of gods and the goddesses once revered in that culture. Proof of this are the temples that had been built out of love, awe and fear of these deities such as those in the Acropolis and those of Zeus and Poseidon. These statues still stand today despite the fact that Athenians are now largely Orthodox Christians.

Athens progressed through distinct historical phases. Athens has never existed in isolation and constantly had to confront other empires and entities be they the Spartans, the Persians, the Romans, the Byzantines or the Ottomans. Each of these interactions left an indelible mark on Athens. This is manifested in the architecture and the constructed monuments of the time, for example Roman Emperor Hadrian's ambitious building projects as well as in the arts and crafts well preserved from that time such as the frescoes from the Byzantine era on display in the museums of Athens.

Athens gained independence from the Ottomans in the 1820s-30s. Since then it has continued to flourish and has added to itself  in the form of the Presidential Palace, the University of Athens and the National Gardens.