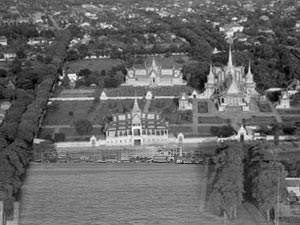 Phnom Penh became the permanent seat of the King in 1866. Royal Palace was built in the city for honor. Later French colonists established schools, hospitals, courts, heath centers, offices, prisons, etc to turn a partial village into a capital city. Soon in the 1870s the city’s picture changed into a modern metropolitan.

By 1920, Phnom Penh gained popularity as the ‘Pearl of Asia’. French invested in the construction of several homes and mansions in the city. Over the next few decades, Phnom Penh developed railway tracks and an International Airport.  Under the rule of Sihanouk’s, Phnom Penh grew drastically in terms of modern infrastructures. After the war with Vietnam, another era of construction began. This time, foreign investors like France, Australia and Japan played a vital role. Loans were taken from The Asian Development bank for laying down roads and other construction purposes. After all the wars, constructions, growth, investments, and modernization, Phnom Penh, with a population of 2.0 million stands as one of the major tourist stops of Asia!