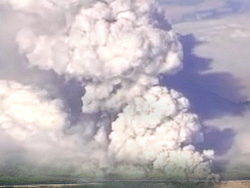 April 16- Updated News - A volcanic eruption in Iceland has caused the closure of airports in five Northern European countries. The UK, Ireland, Sweden, Denmark and the Netherlands shut their air space from midday Thursday.  According to a statement by the UK's air traffic control company NATS, all air traffic in the UK will remain suspended until 7pm Friday evening. Since this is a fluid situation and weather conditions may change the drifting volcanic ash clouds, all passengers are requested to inquire about their flight departure before heading to the airport.

Volcanic ash is sweeping in from Iceland causing complete havoc in air travel globally. Over 7000 flights have so far been cancelled and this may impact flights throughout the next few days.

The eruption began on March 20th and caused a hole to burst in a mass of ice, creating a cloud of smoke and ash that has now spread high into the air.

This is arguably Doha’s most well known and definitely the most popular attraction. Located in Doha Bay, the wonderful beaches are worth a visit. Children are able to enjoy  in a shallow pool as well as on some fun fair rides. The dhow rides are also worth going on. Camel rides and water sports for the more adventurous are also available here. Timings: Daily 12 – 9: 30pm Admission: 20...

This is the most famous seafront pathway in Nice. It is named after the English who were the ones to have it built during the 18th century when they began coming to Nice for their holidays. The Promenade which is translated as "Walk of the English" runs for four miles and is home to some of the most exclusive restaurants in Nice. Here you can see people relaxing, bicycling, lounging on t...