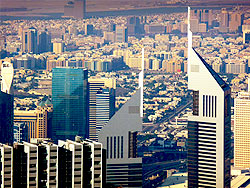 Union, the developer of the trains and the main operator of the national rail network in the UAE, has announced the details for the upcoming railway project to connect the UAE, including details for the stages of implementation time.

The company said the first railway project will be launched in 2013. The company will transfer the first shipments of grains of as of today, including sulfur from its source in the Shah to Ruwais where a station is to be built. Habshan is to be exported abroad in cooperation with Abu Dhabi National Oil Company "ADNOC."

Mattar Al Tayer, Deputy Chairman of the Board of Directors of Union stated the new railway project is being developed in three phases.

The first phase is "Shah - Habshan - Ruwais", which will link the Habshan Ruwais at the beginning of 2013 and Shah Bhbashan mid-2014 the company has already been put forward earlier this month tender contract for the construction of the first phase of the train network in the western region according to plan with ADNOC.

As for the second and third phases Al Tayer said that they are currently at the stage of completing designs and selecting the tracks. Those stages are expected to begin construction work before the end of this year throughout 2012.

Topkapi Palace was the primary residence of the Ottoman sultans from 1465-1856.  Construction began in 1459 under orders from Sultan Mehmed II, the conqueror of Constantinople.  The palace was built on the original site of Byzantium, on top of the old Greek acropolis.  Upon its completion, Topkapi Palace became the political center of the Ottoman Empire.  As the empire continued to expand, so did ...