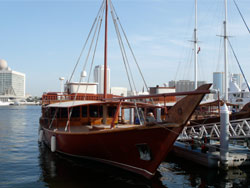 During the meeting, Al-Amiri stressed the importance of cooperation in the field of tourism investment and promoting tourism between the two countries.

For her part, Dr. Haifa briefed Al-Amiri on the Jordanian Council of Ministers' resolution issued recently for giving equal status to Arabs tourists vis- e-vis Jordanian when charging fees during their visit to the archaeological and tourism sites and the encouragement of Arab tourism to Jordan.

She also noted that the number of UAE tourists last year hit 37 thousand visitors with increase of six per cent comparing to the year 2009 noting that the Kingdom of Jordan is linked to UAE with tourism cooperation agreement signed by both parties in 2004 to promote tourism between the two countries.

Trinity is Ireland's oldest college.  Its charter was granted by Queen Elizabeth in 1592 as part of the effort to consolidate English control of Ireland.  Catholics were not allowed entry into college until 1793, and all such restrictions were banned by 1873.  The university started to grow in the eighteenth century as the political situation in Ireland stabilized.  Many of the...

The Abu Dhabi International Marine Sports Club was inaugurated in 1993 to form a firm organizational ground for powerboat racing in Abu Dhabi. ADIMSC is the backbone of Powerboat racing in conjunction with DIMC in the U.A.E and Gulf region en bloc. It has been chosen as a National Authority of the UAE Marine Sports Federation and presently is a certified member of Union International Motonautique....