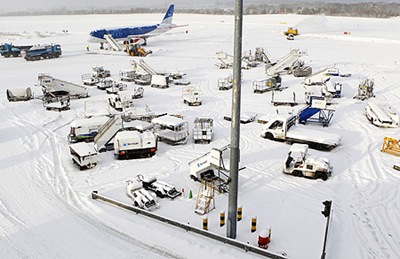 Snow and other forms of bad weather in Europe have posed travel disruptions for a fourth day, with Etihad Airways saying that heavy snowfall has forced its Dubai-Frankfurt flight to land in Munich, from where passengers were transported to original destination by train. Meanwhile, the carrier operated two relief flights to Heathrow and Manchester to pick up the backlog. "Now we are running on schedule. No extra flights were added for today as the airline's passenger backlog has been cleared," an Etihad spokesperson said. Emirates said in a statement that all of its UK flights are operating "as close to schedule as possible" and so are those from the rest of Europe.

This park is located 26 kilometers from the city centre and has four venues stretched over 1 sq-km; there is a café and picnic facilities on the grounds. The biggest venue here is the Arabian Wildlife Centre (531 1999) which incorporates a zoo and a breeding centre. There is an indoor aviary that houses flamingoes, houbara bustards and Indian rollers while the outdoor enclosures have baboons, stri...

The Chester Beatty Library is a combination library and art museum located on the ground of Dublin Castle.  It was established in 1950 to house the spectacular private collection of Sir Alfred Chester Beatty, a Canadian mining magnate.  He donated the collection to Ireland two decades before his death.  The current building was opened in 2000. There are three main collections: ...