Thousands of Egyptians cancelled plans to travel to Saudi Arabia for their small pilgrimage following an announcement by the Egyptian Minister of Health, who said he was considering a three week due to the H1/N1 swine flu outbreak.  Vice President for the Chamber of Commerce Nasser Turki said bookings have fallen 60% for the Umrah to Makkah pilgrimage.

The World Health Organization has warned there could be more outbreaks if the H1/N1 virus enters Africa, which has fewer resources.  So far there have been only seven reported outbreaks of the virus in the Middle East.  The H1/N1 virus was contracted by Israelis who had just returned from Mexico, the epicenter of the outbreak.  Mass pilgrimage to Makkah has previously resulted in deaths from infectious disease.

Mount Mary’s Church, a Roman Catholic church, is probably Mumbai's most famous church. It is visited by people of all faiths. Perhaps the oldest church in Mumbai, it was built by the Portuguese around 1640 AD. It is situated on a hillock about 80 m above sea level and from there one can get magnificent views on the waters of the Arabian Sea. A  week-long fair held annually on the Sunday follo... 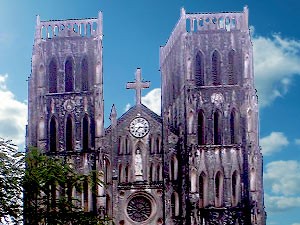 St Joseph's Cathedral, also known as Nha Tha Lon, is the oldest Roman Catholic Church in Hanoi and was consecrated on the night of Christmas in 1886. Built by the French on the site of a demolished pagoda; St Joseph's Cathedral is known simply as the "Big Church" among the Vietnamese of Hanoi and is designed to resemble the Notre Dame in Paris. Address: Nha Chung Street, Hanoi ...