The UAE could have its first man in space 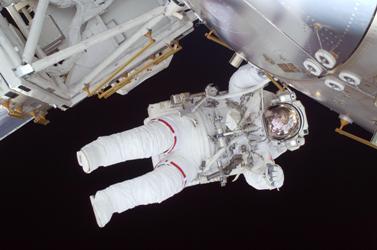 The world could soon see the first Emirati in space, as the Global Space and Satellite Forum 2011 (GSSF) today focused on developing the regional space industry’s experts of the future.

During the final day of GSSF, senior representatives from the US National Aeronautics and Space Administration (NASA) delivered an interactive UAE Space Career and Exploration video uplink to a gathering of aspiring Emirati astronauts and space industry hopefuls.
Appearing live in the video presentation from the NASA Lunar Simulation Centre in California, Doris Daou, Director for Education and Public Outreach, NASA Lunar Science Institute was joined by NASA colleagues Greg Schmidt and Brad Bailey, Deputy Director and Senior Scientist respectively.

The boffins demonstrated the advanced robotic technology of the field science rovers used in inter-planetary exploration and the Centre’s simulated lunar environment. The presentation also gave attendees the chance to participate in an interactive Q&A session.
Dr Omar Al Emam, Voluntary Space Technology Advisor, Arab Science and Technology Foundation (ASTF), delivered the introductory address. He spoke about the work of the NASA Lunar Science Institute in California and the importance of hands-on space technology for the youth of the region.

“Education in this field is important because it helps build national capability. Rather than simply outsourcing the expertise for such projects, this creates the ability to build local knowledge and boosts regional space technology capability,” said Al Emam.
“Increasingly, we are seeing local universities within the UAE introducing space technology into their curricula and already Emirati students are becoming actively involved in the industry. We have seen UAE students already learning and applying knowledge about the use of space observation data,” said Al Emam.

He also referred to the Emirates Institution for Advanced Science and Technology (EIAST), which commissioned the UAE’s first earth observation satellite, DubaiSat-1. Al Emam highlighted the involvement of Emirati scientists, who worked at the satellite’s Korean launch site.

Elsewhere on day three at the GSSF event, a panel discussion took place about space and satellite careers and opportunities, featuring experts involved in space projects in the UAE and Oman. Emirati professionals who lead some of the UAE’s most prestigious space and satellite projects spoke about their career motivations and how local students can prepare for careers in the sector.

For students, the final day of GSSF provided the chance to hear from some of the world’s leading experts in the field, while exhibitors were afforded the opportunity to connect with the region’s future generation of space professionals.

ESNC is a chance for competitors to learn about the principles of Global Navigation and Satellite Systems (GNSS) and how its services can be applied in supporting various aspects of growth within the MENA region.

Fraumünster, or Church of Our Lady, is one of Zurich's most important churches.  The original church was opened in 850 and served as a Benedictine Abbey.  The convent here was home to many of the elite women of Medieval Germany.  The crypt dates from this original building.  The current church was built in the mid-thirteenth century and a Romanesque spire was added in 1732.&nbs...

Address: north of Plaza Bolivar Timings: open daily (including holidays) Originally constructed as a majestic church, the National Pantheon was converted in 1874 to act as the last resting place for many of Venezuela’s prominent personalities, based on their outstanding achievements in fields of politics, warfare, social service, and education and science. The central, focal space with...