The Elbphilharmonie – a New Landmark 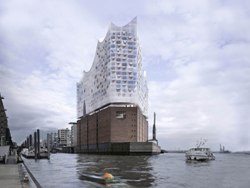 Hamburg, June 01 – During a Roofing ceremony that took place on 28 and 29 May, Hamburg presented with the “Elbphilharmonie” (Elbe Philharmonic Hall)  its new concert house to the public. More than 5000 guests gained an insight into the making of this unique concert house. Designed by Swiss architects Herzog & de Meuron, the magnificent building is to become Hamburg’s newest landmark.

The daring harmony of Kaispeicher A, this historic redbrick monument, and the cool, glass-bodied design will be Hamburg’s new architectural gem. Located right on the Elbe River, this 110 metres high building combines tradition and modernity. The building complex is constructed on approx. 1,700 reinforced concrete piles. It comprises three concert halls, one hotel, 45 flats and the Plaza, a public square elevated 37 metres above the river, with an amazing 360 degree panoramic view of the city.
At the core of the Elbphilharmonie lies one of Europe’s most challenging building projects: an acoustically superior concert hall that stands 50 metres above the river and provides seating for 2,150 people. With its unique location, the Elbphilharmonie Hall can be regarded as an unprecedented work of art. This magnificent building is not just a tourist attraction – it will also be a unique venue for classical music, jazz, pop and world music.

Even now, during construction, the Elbphilharmonie is attracting worldwide attention. Under the artistic direction of Christoph Lieben-Seutter, it aims at becoming one of the world’s finest music venues. The building is part of one of Europe’s largest urban development projects, HafenCity Hamburg, and can be considered an icon of this booming port city. Moreover, it also portrays the public spirit of the Hamburg citizens: from among those €400 million construction costs, more than €77 million alone has been covered by donations and further revenues.

After the Roofing ceremony, the work on this ambitious construction project will be further accelerated, so that the building will be accomplished by the year 2012. 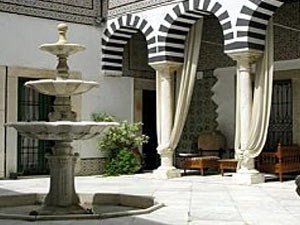 A palace turned museum, the Dar Bach Hamba features exhibitions on cultural handicrafts along with artistic paintings and artifact belonging to various Mediterranean countries. Tourists get to see cultural glimpses of multiple civilizations and cultures under one roof together with the magnificent architecture of the 17th century palace. Apart from housing galleries, the museum also has hall r...