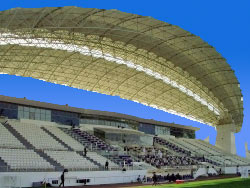 June 02, 2010- The five finalists for the Sheikh Khalifa Bin Zayed Stadium in Khalifa City, Abu Dhabi, have been asked to quote their prices for district cooling, said an industry source on Tuesday. The closing date for this particular tender is June 21. "They have asked us to revise the tender and include district cooling in the tender," said one of the sources. "Maybe, the client was dealing with it directly and now it is in our scope," said a source.

The billion-dollar football stadium project is being developed by Mubadala Development Company, owned by the Abu Dhabi government.
At the moment, there are five companies that have qualified for the tender. These include France's Bouygues with Arabian Construction Company, South Korea's Samsung Corporation and Germany's Ed, Zueblin, Japan's Taisei Corporation and Beijing-based China State Construction Engineering Corporation, France's Vinci Grands Projets with Athens-based Consolidated Contractors Company and China's Sinohydro Corporation.

The Museum of Vietnamese Revolution documents the country's various struggles for independence and the history of the Communist Party. The rustic museum houses objects on display offer a creative and multi-dimensional insight; from a Japanese Buddhist drum used to rally the party in the 1960s to Vietnam’s first sewing machine. Address: 25 Tong Dan, Hanoi Tel: +4 3825 4151 ...