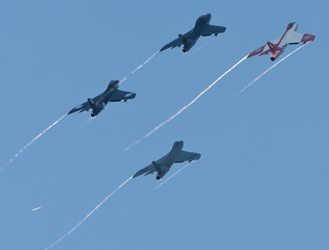 With serving or former members of the British Royal Air Force piloting all four of Team Viper’s supersonic jets, the squadron’s dazzling formations will be one of big draws at the world-famous show, which runs from February 2-5 at Al Ain International Airport, on the edge of the Oasis City.

Each Hunter aircraft, named after the Rolls Royce Viper engines that power the jets, weighs over 9 tonnes, produces over 10,000 lbs of thrust and is capable of speeds approaching 1,000 kilometres per hour.

“Team Viper thrilled the crowds last year with its amazing, gravity-defying display, and it will once again appear at this world-class spectacle in February,” said Faisal Al Sheikh, Events Manager, Abu Dhabi Tourism Authority (ADTA), which organises the Al Ain showpiece in conjunction with the UAE Armed Forces. “The Al Ain Aerobatic Show is acknowledged as one of the world’s leading aerobatic shows, and in 2011 we will be making it bigger and better than ever before, both on the ground and in the sky,”

“Flying over the stunning Arabian desert for the Al Ain Aerobatic Show last year was a truly memorable experience,” added Chris Heames, who has over 6,000 hours experience as a display pilot and will captain the Team Viper squadron.

“The Al Ain show is the place to be in the Middle East and is now well established as one of the most important on global aerobatics calendar. We’re putting together something special that really will really give spectators something to remember. I don’t want to give too much away, but it will be a high energy performance, featuring both high speed and low level passes, formation loops and barrel rolls, as well as our stunning mock ground formation attack scenario, which we will be performing for the first time in the Middle East.”

Now in its ninth year, the Al Ain Aerobatic Show is firmly established as one of the world’s top five aerobatic events. Crowds of 130,000 are expected to watch the world’s top pilots manoeuvre their agile aircraft in four days of drama in the skies above Al Ain.

Taking centre-stage at the 2011 event will be the unique, multi-discipline FAI Desert Challenge. Arranged by the Fédération Aéronautique Internationale, the world air sports federation, the Desert Challenge will see six world-class pilots flying CAP232, Sukhoi 26 and Xtreme aircraft, in a classic and free-style format competition.

Making their Middle East debut will be the Baltic Bees from Russia, flying L-39C Albatros twin-shaft jets at speeds topping 900 km/h, while the eye-catching bravado of Miss Demeanour, a Hawker Hunter built for Britain's Royal Air Force as a mark F.4 XF947 in 1956, is back for a second consecutive year.

In total, more than 15 aerobatic and display teams from four continents are appearing at the family-orientated show, including wing-walkers, subsonic jets and stunningly choreographed “dancers in the sky.”

For 2011, ADTA has significantly expanded the spectator village to make it the largest to date. Among the wide range of activities on offer for all the family will be karting, model aircraft displays, state-of-the-art simulators, helicopter flights and F&B outlets catering to every taste.

ADTA is also offering one lucky enthusiast the chance of a lifetime to fly with one of the world-class pilots at the show via the official website www.alainaerobaticshow.com.

Daily tickets for the show are Dh40 per adult and Dh25 for children between three and 10 years old; children under three enter free. Visitors can check the website for details on how to purchase tickets – www.alainaerobaticshow.com

Commonly known as the Oasis City and central to the cultural heritage of the country, Al Ain is approximately 80 minutes drive from Abu Dhabi and Dubai, with both drives offering stunning views of the golden desert landscape as it transforms from stunning dunes into a verdant oasis.

The O2 Arena is perhaps the most happening place in London. It is a fairly large entertainment district in South East London and includes an indoor arena (where large concerts and events are held), an 11 screen multiplex cinema where the main auditorium has 770 seats, an exhibition space, piazzas and over 20 different restaurants and cafes. It is interesting to note that fast food chains were ba...