The four day “Taste and Flavour of Pakistan” festival was opened at the Millennium Hotel in Abu Dhabi Tuesday night by Pakistan Ambassador Khursheed Ahmed Junego.  The festival offers a sampling of Pakistan’s cuisine known for its spices, rich flavor, and aroma.  Ambassador Junejo described Pakistan’s cuisine as a fusion of three Asian regions – Central, Middle East, and South Asia.  He said “Pakistani cuisine is often spicy and known for its richness and flavour”

Bilal Khan Pasha, Commercial Counselor at the Pakistani Embassy is organizing the festival.  He said they have selected certain culinary hot dishes that are usually not available at UAE hotels so “we have specially called chefs from Pakistan as well as chefs based in the UAE to come over here and prepare food for the next four days.”  Dishes at the festival include tangy palak gosht, pakodakarhi, sajji, chicken masala, kebabs, nirhari, mango pickles, and extremely hot chicken biryani.

This is the smallest island in Maldives, without exaggeration one can walk around it in 15 minutes. Manta Point is a ‘tropical paradise’ and one of the best diving spots. It’s one of the best places in the world to see manta rays maneuver through the water around you. It’s a mesmerizing sight. They swim forward in flocks of four or five, some of them up to three metres across blocking out the sun.... 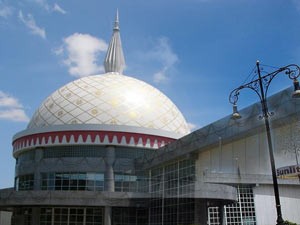 Located in Midtown Manhattan, the Empire State Building is the most recognizable feature of Manhattan’s skyline.  Construction began on St. Patrick’s Day 1930 and remarkably the building was completed just one year and forty five days later, opening on May 1, 1931.  The height to the top of the spire is 443.2m while the roof tops out at 381m.  The Empire State Building was the talle...