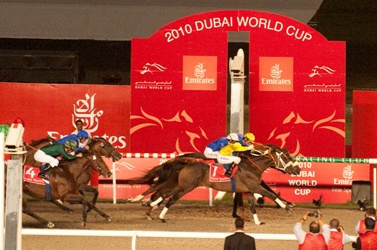 The world's richest horse racing event - the
Dubai World Cup - anticipates more than 60,000 international visitors this
year at the Meydan Racecourse. Visitors will have a chance to win one
million Miles in a raffle draw from Skywards, the frequent flyer programme
of Emirates Airline.

Skywards is once again offering a top prize of one million Miles in its
11th annual Thanks a Million draw at the Dubai World Cup on Saturday, 26
March 2011. Funds raised will go to three charities: Dubai Centre for
Special Needs, the Red Crescent, and the UN World Food Programme.

In addition, on 24 March, there will be a prize of 250,000 Miles at the
Breakfast with the Stars, the annual Dubai World Cup breakfast event
providing racing enthusiasts the opportunity to watch the horses (the
"stars") exercise on the track at the Meydan Racecourse paddock, and
another prize of 250,000 Miles at the Arabian Nights event at Meydan arena
adjacent to the Bab Al Shams Desert Resort and Spa.

Raffle tickets, priced at just Dhs20 each, are on sale at select Virgin
Megastores retail outlets until 22 March, the Meydan Ticket Sales Centre
from 18 to 25 March and by 100 volunteers at the Meydan Racecourse on the
Dubai World Cup day, 26 March.

Now in its 11th year, the Skywards Thanks a Million draw has raised over
Dhs 2 million for various charities such as Riding for the Disabled
Association of Dubai (RDAD), UNICEF, UAE Red Crescent and Rashid Paediatric
Therapy Centre.

Lying on the east side of Al Ain Oasis, the National Museum brings together the remnants and illustrative findings from the Stone Age until the early days of the United Arab of Emirates.  This museum is a perfect destination for those who are interested in a profound understanding of the cultural life of the region’s past. The National Museum exhibits old versions of Holy Quraan, and manuscripts ...

The Premises is a superb exhibition theater that plays hosts to numerous exhibitions throughout the year, be it performing arts or fine arts. It is one of the most creative and contemporary looking exhibition centers in the city. Address: Civic Theatre, Loveday Street, Braamfontein Telephone: +27 (0)11 877 6800 Website: http://onair.co.za/thepremises Opening hours: Tues-Sat 1200-2000 ...