The Shindagha Heritage Village has seen a big increase in the number of tourists visiting.  Dubai officials say the village is oldest area in Dubai.   An Australian national, Diane Blackman, recently stopped in the emirate for two days and chose to spend her time at Shindagha Heritage Village instead of Dubai’s hotels and malls.  While browsing the traditional Souk with her family she said “We wanted to get a flavour of Middle Eastern culture while we were here.”

There has been a 32 per cent increase in the number of commuters using the city’s water busses since last year, and this has resulted in a higher number of visitors to Heritage Village.   Director of Heritage Village and Diving Village said he has clearly seen the increase in visitors, although they do not record numbers.  The village gives visitors an idea of Bedouin life before the oil boom.

While on first look the beaches of Ipanema and Leblon seem to be just one long beach, there are posts along it that subdivide it into sections appropriate for the diverse crowds that come here. Posto 9 is where you’ll find Rio’s coolest and gorgeous people hang out. That area is also called Cemeterio dos Elefantes because of the old leftists, hippies and artists who go there as well. The beach in ...

The Horror Café  has an interior that is sure to have you screaming and dancing for more of it!  It is a great nightclub with lots of stuff from horror, sci-fi and other such stuff littered across three floors, and is always full of music, be it reggae, traditional African or modern dance mixes!   Address: 15 Becker Mirium Makeba Street Telephone: +27 (0)11 838 6735 O... 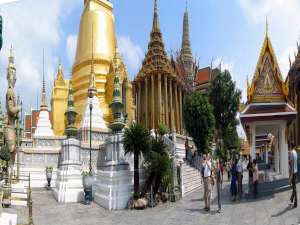 This is located within the grounds of the Grand Palace. It is home to a statue of Buddha made of green jasper and referred to as the Emerald Buddha. This is a fantastic image of Buddha passionately revered by the Thais that sits atop a massive 11 meter tall gold altar, protected by a nine-tiered umbrella. The surrounding murals depicting different scenes from the Thai version of the Ramayana myt...