Prince Sultan bin Salman, chairman of the Saudi Commission for Tourism and Antiquities (SCTA), announced on Monday that the Ministry of Culture and Information has joined hands with his organisation.  Talking to journalists after the signing ceremony, Prince Sultan highlighted the remarkable progress achieved by the Saudi media under the leadership of the Minister of Culture and Information, Abdul Aziz Khoja.
The agreement was signed to get the ministry's support for the first international conference on architectural heritage in Islamic countries, which will be held in Riyadh from May 23 to 28. "This conference will be an important event with a variety of programs and with the participation of several government departments," said the prince. He also unveiled plans to hold a heritage day at Saudi schools and universities to coincide with the conference and hoped the Saudi media would highlight these events.
Meanwhile, the agreement stipulates that the ministry will invite Saudi and foreign media personnel to cover the conference while facilitating the latter at the same time. The ministry will also contribute to the publication of an illustrated book on the Kingdom's architectural heritage. 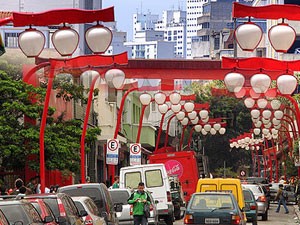 For those looking to get a taste of the hustle and bustle of Sao Paulo, the Praca Liberdade must not be missed. This is a fair held every weekend that has on display (and sale) Asian food and crafts. It is also home to religious festivities and represents the essence of Sao Paulo’s diversity. Address : Av. da Liberdade and Rua dos Estudantes, Liberdade  ...

Plaza (palace) of the government has been home to the Prime Minister, Finance Minister and the Foreign Ministry ever since the Independence of Tunisia. The place is worth a visit with its nicely trimmed gardens and the dominating building amidst them. To the west of the Plaza is the Mosque of Kasbah built in the 13th century with square shaped minarets that beautify the place. On the other side of...

The King Abdul Aziz Mosque is perhaps one of the oldest mosques in Jeddah, with a minaret that was built in 7 AH. The open central area is built in a way to allow open-air ventilation. The mosque has been renovated several times. Address : Al-Nada Market in Al-Hanafi Mosque in the middle of the historical area in Jeddah - AL-Bald ...