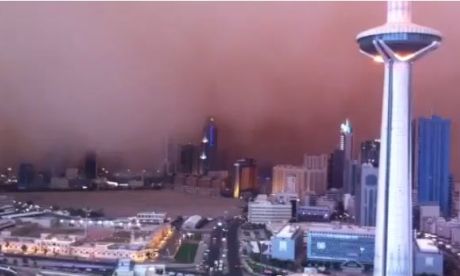 An unexpected sandstorm struck the Gulf yesterday, reducing visibility on the roads and streets for several metres in Kuwait, Saudi Arabia and the UAE.

Kuwait was the most affected area with oil refineries and the Kuwait International Airport stopping operations temporarily until the storm had cleared.

The Kuwaiti International Airport was also shut down around 6 p.m. ( 1500 GMT). Visibility was reduced to several meters in some areas.

Rumeli Fortress, also called Rumelihisarı, was built by Ottoman Sultan Mehmet II (aka the Conqueror) for the final siege of Constantinople.  Its position on a bend in the Bosphorus, at its narrowest point, meant no ships could get in from or out of the city to the Black Sea.  Construction began in April 1452 and lasted four months.  Constantinople finally fell in April of the next y...

Mehdu Ziyaarath, located opposite the Hukuru Miskiiy is the shrine of Abu al Barakaath Yusuf al Barbari, a North African. According to the people of Maldives, he was the one responsible for converting the Maldivians to Islam in 1153 AC.  ...

One of the most popular tourist attractions in Maldives is the island of Fuamulaku. The island is exceptionally fertile and has numerous fruit and vegetable farms where one can get delicious locally grown pineapples, mangoes and oranges etc. The fruits and vegetables grown over here are not found elsewhere in the country. Fuamulaku is a secluded island in the middle of the Equatorial Channel and a...