May 19 - The 7th Oman Travel Mart (OTM) began on Monday at the Oman International Exhibition Centre under the patronage of Ahmed bin Sulaiman al Maimani, Under-Secretary of the Ministry of Commerce and Industry. The exhibition has some 50 companies participating in it.
The fair is being attended by many local as well as foreign dignitaries and is expected to boost tourism and travel in the region. In fact, many exhibitors were hopeful that tourism in Oman has continued to increase despite the global financial meltdown. Ibrahim Said al Wahibi at Al Hoota, who was at the Cave stall, said: "Ever since its opening in 2006, Al Hoota Cave has attracted increasingly large number of tourists. Foreign tourists come here in large numbers during the peak season from October to April, while local and regional tourists visit the cave round the year, including the summer."
Similarly, Ahmed Murad al Raisi, General Manager of the four-star Butterfly Hotel Suites in Sohar, said: "During the past six months the hotel has had a very good response largely because tourism is booming in the Sultanate."
Sponsored by Oman Air, OTM features over 30 local companies from the travel and tourism sector showcasing inbound tourism.

A very interesting addition to the list of museums in Bucharest is the Natural History Museum in the center of the city. This museum has a collection of over 300,000 exhibits and illustrations that trace the evolution of the earth through history. The exhibits are very impressive and you are guaranteed to be lost in the display for hours. Some exhibits also show how species evolved and have adapte... 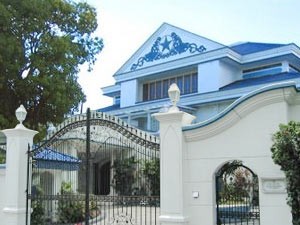 Address: along the same road as Medeu Ice Rink, Dam, and Chimbulak. Large, sprawling park, which contains quite a number of apple trees in addition to its towering alpine cones. Pleasant stop, especially if you catch a light drizzle. ...