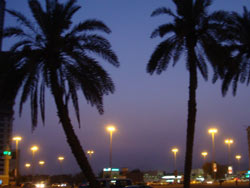 June 21 - The municipality opened on Saturday a new park in Jeddah's northern Dhahban district, part of the "100 Parks in 100 Weeks" initiative.

The 25,000-square-meter park is named "Jewel of the Bride," a reference to Jeddah's nickname, "Bride of the Red Sea."

"This park has been equipped with all necessary facilities, including sitting areas and lighting poles to add to the pleasant atmosphere for visitors," said Bahghat Hamoh, head of parks and city beautification.
Hamoh urged visitors to the park to take utmost care of the place, encouraging the use of the numerous trash bins scattered on the grounds.

"The municipality has launched an intensive program to rehabilitate and develop older parks in various Jeddah neighborhoods," said Hamoh. "This is in line with the rapid growth of the city and with the needs of its residents."

There are approximately 450 parks and gardens in and around the city, though many have been neglected over the years and have become overgrown and trash-strewn.

This too is a private collection consisting of art dating from the Cycladic Era to the Roman times. The emphasis is on the time period of 3000B.C to 2000 B.C. There are over 200 exhibits ranging from marble statues to marble figurines to pottery.   Timings: Daily [except Tuesday and Sunday] Address: Neofytou Douka 4 Admission Tel: 210-722-8321 Website: www.cycladic.gr  ...