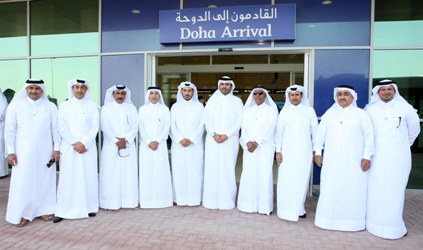 Doha, QATAR – Dignitaries and local and international media were today given an insight into the new Doha Arrivals terminal at Doha International Airport ahead of the facility’s scheduled opening Sunday 19 December.

Doha International Airport Chief Executive Officer Akbar Al Baker, who has spearheaded several major infrastructural developments at the airport, guided the delegation through the new terminal, the opening of which will support forecasted increases in passenger numbers travelling through the State of Qatar.

Al Baker said that the opening of the new Doha Arrivals terminal and other airport developments were necessary measures adopted while preparations for the New Doha International Airport (NDIA) continued.

“With the pace of development in the State Of Qatar increasing exponentially, the new Doha Arrivals terminal and other improvements will sustain the existing airport’s expected growth in passenger numbers until the time comes when we move all these operations to New Doha International Airport in 2012.

“The existing Doha International Airport is well prepared to handle this interim period of growth and we are also planning ahead to the future to ensure a smooth transition when the new airport becomes operational,” he said.

While the massive US$14.5 billion NDIA project nears completion, and is scheduled to open during 2012, a raft of interim measures including the Doha Arrivals terminal has been implemented. These improvements are designed to handle the growth of national airline Qatar Airways as well as facilitate dramatic increases in passenger traffic.

The airport’s dedicated new Doha Arrivals terminal will open on Sunday with the first passengers arriving on Qatar Airways flight QR133 from Kuwait, scheduled to touchdown at DIA at 1130 hrs local time.

The last flight operating through the existing arrivals area in the airport’s main terminal will be Emirates flight EK841 from Dubai, scheduled to land at DIA at 0830 hrs local time.

All passengers on subsequent flights arriving at DIA will be directed to the new terminal where arrival formalities, including immigration and baggage collection will be conducted.

Following the opening of the Doha Arrivals terminal, work will begin on expanding the Departures & Transfers terminal to provide larger check-in and passenger facilities, as well as additional boarding gates and other amenities.

This eye-opening collection of artefacts are a must-see for visitors who want to know the real past of Jews in Germany. Items from over 2000 years ago are displayed. Although the holocaust is only a small section of the museum, its presence pervades the entire place. Website: www.jmberlin.de Lindenstrasse 9-14, Telephone: 25993300.  ...