Monorail Linking Holy Sites Will Be Finished For Haj Next Year

The Supreme Haj Committee issued a report announcing the monorail project linking the holy sites of Arafat, Mina, and Muzdalifah will be finished for Haj next year.   The report said “Work on the project began in Muharram (soon after the last Haj season) and will be ready for use to 35 percent of its capacity during the Haj season of 1431.”   The multibillion-riyal project was approved by King Abdullah in order to facilitate transport of over three million pilgrims between the holy sites.   King Abdullah is custodian of the Two Holy Mosques.

The China Railway Company is leading an association of companies to implement the project which will operate at full capacity during the Haj season of 2011.   The monorail project will help remove over 53,000 buses and other vehicles used by the pilgrims travelling by land within the Kingdom and neighboring GCC countries.

The zoo houses a wide variety of caged animals some of them for conservation purposes due to their alarmingly diminishing number which includes species of polar bear and pygmy hippos. Special area for children has also been designed where they are able to interact with tame animals and serve them with different edibles at the same time.   80 Mandai Lake Road, Singapore Telephone: +95 ... 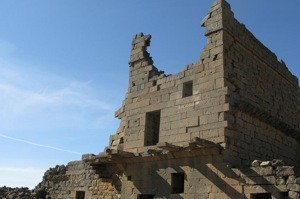 The town of Umm Al Jimal was likely founded by the Nabateans in the first century BC.  It was incorporated into the Roman Empire in the second century AD, but soon after was destroyed in a revolt.  During the Byzantine Period, the city prospered as a military outpost and trading center.  It's heyday was during the sixth and seventh centuries, before war and a devastating earthquake ...