Middle East and North African tourism to return stronger than before

Participants at the UNWTO/Arabian Travel Market (ATM) event on the Future of Tourism in the Middle East and North Africa held at the World Travel Market were unanimous in agreeing that tourism in the region, which has for long lived with uncertainty and a number of external shocks, will return from current challenges stronger than before (London, UK, 9 November 2011).

“The on-going changes in the Middle East and North Africa bring enormous opportunities,” said UNWTO Secretary-General, Taleb Rifai, opening the event. “Rule of law and democracy will empower local communities, opening the door for these to be better engaged in the process of tourism development. There will surely be a more transparent business environment, increased support for smaller businesses, as well as stronger regional integration and cooperation.”
Participants recalled that countries in the region were facing what many others had previously experienced and benefited from – the process of transition into a democratic state.

Jordan’s Minister of Tourism and Antiquities, Nayef Al Fayez, highlighted the on-going investment projects in the country, as well as the efforts to ensure that the benefits of tourism spill down to the community level. ”Communities are the first to be affected when tourism demand falls and this is why we need to support them,” he said.

Mehdi Houas, the Minister of Tourism of Tunisia, stressed that the country is looking to position its culture, history and people at the center of tourism development and promotion.

For Egypt, where tourism numbers this year are expected to have fallen by between 20 and 25% compared to 2010, the Minister of Tourism, Mounir Fakhri Abdel-Nour, said the country was “committed to tourism as a sector which contributes 12% of national GDP.”
Misperception was highlighted as one of the most pressing challenges, with participants stressing that the Middle East should not be seen as one block but rather as different countries with different realities and challenges.

Close cooperation between the public and private sectors was pointed out as one of the keys for success in the destinations of the Emirates and one of the ways to reinforce the growth of tourism in the region.

“The Middle East is rich in culture and people; the sector has been expanding in terms of infrastructure and air capacity. If we work together there is an incredible future for the region,” said Guy Crawford, Chief Executive Officer of the Jumeirah Group in Dubai.

The UNWTO/ATM debate on the Future of Tourism in the Middle East and North Africa set the scene for a new UNWTO/ATM Forum to be held on 30 April 2012 in Dubai in the framework of the Arabian Travel Market (30 April-2 May).

“We expect that the UNWTO and ATM forum will have a significant and positive effect on regional collaboration to sustain growth in the travel and tourism sector here,” concluded Mark Walsh, Group Exhibition Director, Reed Travel Exhibitions.”

If you must see only one museum in Lisbon make it this one. Housed in a 16th century convent, this place pays homage to one of Portugal’s most famous exports the azulejo (tile). The exhibits cover everything, from the azulejo’s beginnings in the Ottoman empire to the present. Star attractions include a 36m panel depicting a pre-earthquake Lisbon and a gold-bedecked baroque chapel. The cafe also ge...

With almost 25 perfect of its surface area covered with navigable waterways, Amsterdam is often known as the Venice of the East. Canal Cruises have hence emerged as a major tourist attraction in the city. For those who want to go on a canal cruise, boats can be taken on rent from various boat rental companies. There is a choice of pedal or electrically powered boat. Once popular, Houseboats are no... 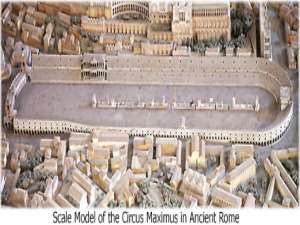 The Circus Maximus,which is situated in the valley between the Aventine and Palatine Hills,was a horse and chariot racing area. In the 1st C, it was Rome’s biggest stadium, a 250,000-seater. It was used for many other purposes as well. Marketing and gambling also took place here. Even though chariot races were held here as far back as 4 BC, it wasn’t until Emperor Trajan rebuilt it after the AD ...