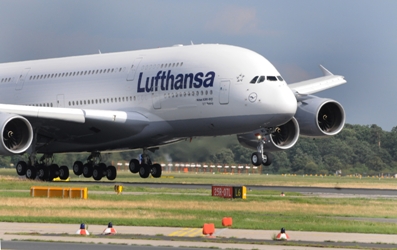 Deutsche Lufthansa AG significantly improved its traffic performance in 2010 compared with the previous year. All in all, the airlines in the Group welcomed 90.2 million passengers on board their flights over the past twelve months. This represents an increase of 17.2 per cent over the previous year. Capacity was up by 12.1 per cent, revenue seat-kilometres grew by 14 per cent. The seat load factor rose accordingly by 1.4 percentage points. Passenger numbers increased in all traffic regions, whereby the steepest growth occurred in the Middle East and Africa region. During the year, the Lufthansa Group transported around two million tonnes of freight and mail, an increase year-on-year of more than 18 per cent. The cargo load factor rose by 7.4 percentage points to 68 per cent. The number of flights was up by 13.1 per cent to a total of 1,014,692.

A total of 90.2 million passengers flew with the airlines in the Lufthansa Passenger Airline Group. Of the total, 58.9 million flew with Lufthansa Passenger Airlines. The passenger count at Lufthansa thus rose by 5.9 per cent compared to 2009 figures. Over the past year, capacity at Lufthansa was up by 3.1 per cent. Revenue seat-kilometres grew by 5.4 per cent. The seat load factor rose by 1.7 percentage points to 79.4 per cent. Passenger numbers increased in all traffic regions, whereby the steepest growth occurred in the Middle East and Africa region.

Lufthansa Cargo also turned in a strong performance: During the year, the company
transported around 1.8 million tonnes of cargo and mail, an increase of 18.2 per cent on the year-earlier level. The cargo load factor climbed by 7.3 percentage points to 70.9 per cent.

The financial results of the Lufthansa Group in the 2010 business year will be published on 17 March 2011 and will be available for download at the Lufthansa website.

The King Abdul Aziz Mosque is perhaps one of the oldest mosques in Jeddah, with a minaret that was built in 7 AH. The open central area is built in a way to allow open-air ventilation. The mosque has been renovated several times. Address : Al-Nada Market in Al-Hanafi Mosque in the middle of the historical area in Jeddah - AL-Bald ...

This is one of the finest temples dedicated to Daoism. This was built in the early 1320s to honor the god Dong Yue thought to reside in the mountain known as Tai Shan.  This god's duties entailed looking after the different levels of hell as well as after the over 70 departments each of which were dedicated to a specific cause such as accumulating wealth, pity/ sympathy, etc.  Believers ...

One of the best places to take children in Sharjah is the Sharjah Desert Park. The Arabian Wildlife Centre offers a Children’s Farm (531 1127, noon-4pm, Dh5 on weekends) where children can pet and feed goats, ducks and ride ponies and camels. The Natural History Museum might also be a good draw card for your children as well as Qanat al-Qasba with the Eye of the Emirates and go-kart track (see Pla...