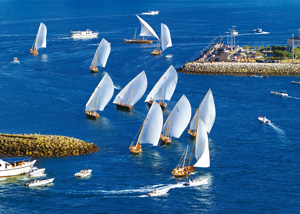 Nora Bheag, a near century old Galway ‘Hooker’ boat, has arrived safely into Abu Dhabi after an historic voyage that set out from the city on Ireland’s West Coast more than six weeks ago.

Nora Bheag ('Little Nora' in English which also means 'Little Light' in Arabic) is in the UAE capital as part of a culture exchange programme to celebrate the maritime histories of Ireland and Abu Dhabi around the emirate’s historic hosting of the Volvo Ocean Race, which takes place 31st December 2011 to 14th January 2012. Schoolchildren in Galway have tracked the entire remarkable journey of Little Nora to Abu Dhabi.

The maritime histories of Ireland and the Arabian Gulf have some similarities. Where the Galway ‘Hookers’ were traditionally used for fishing and transport, Abu Dhabi’s dhows shared a similar ‘work-boat lineage’, associated in their case with pearl-diving, fishing and trade.

The Irish Ambassador to the United Arab Emirates, H.E. Ciarán Madden and members of the Galway Hooker Association, worked together with the Abu Dhabi-based Emirates Heritage Club to develop the cultural exchange programme. With both cities hosting a stopover for the grueling 39,000 mile round the world ‘Everest of Sailing’ in 2012, the initiative celebrates common ties between the two.

Nora Bheag’s crew and supporters are expected to arrive in Abu Dhabi on 2nd January when they will launch, rig and prepare her to sail along Abu Dhabi’s coast, making her the first Galway ‘Hooker’ to do so.

Little Nora has a busy schedule lined up during her stay in the UAE capital including being ‘guest of honour’ at the official Irish Day on the 6th January at the purpose-built Race Destination Village on Abu Dhabi’s Corniche breakwater as well as taking members of the public for special trips around the bay.

The return exchange will happen when the Volvo Ocean Race reaches Galway in Ireland in July next year. An amazing spectacle of six dhows and 60 Emirati crewmembers will be hosted in the city, the Volvo Ocean Race finishing port, to take part in an exhibition race against a fleet of ‘Hookers’ as part of the grand finale festivities.

This is arguably the oldest Buddhist temple in Bangkok. Next to it is the amulet market where different amulets, talismans, icons and other religious symbolic pieces are available which are said to bring good luck and good fortune to the person using them. It is very interesting to see these.   Timings: Daily 9 A.M- 5 P.M Address: Na Phra That Road Admission: B 20 Tel: 02222-6...

Place Mohammed V was originally known as Place de France when it was laid out in 1920 after which it was called Place des Nations Allies after WWII.  This magnificent square is undoubtedly the heart of the city.  It is in fact the seat of the administrative centre of Casablanca. It has the post office, Palace of Justice, the French Consulate and the bank of Morocco all set around a centr...