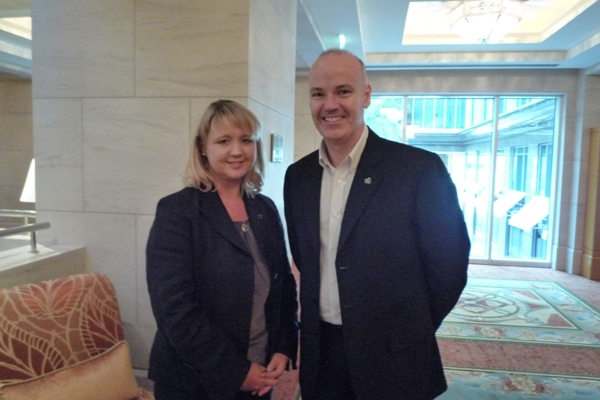 Tourism Ireland, in association with Visit Britain and Visit Scotland, successfully hosted the first of three UAE Travel & Trade workshops organised for Abu Dhabi, Dubai and Kuwait. In working together and investing in the workshops, Tourism Ireland, Visit Britain and Visit Scotland are demonstrating their commitment to supporting the travel trade in the UAE and reflecting the value of the industry to tourism in Britain and Ireland.

Irhal.com got the chance to interview two key individuals from Tourism Ireland at the event: Simon Gregory, the Director of Markets, and Amanda Burns, the General Manager for Middle East and Asia.

Here are some of the questions we asked them:

What is Tourism Ireland doing to encourage Arab tourists? Are you encouraging hotels in Ireland to provide halal food facilities? Several hotels in Zurich and Geneva now regularly provide Halal food and prayer areas for Arab tourists during Ramadan.

Simon: We’ve got 15 of our industry here for the workshop in Dubai, and we’re going to Abu Dhabi and Kuwait and they’re all members of a “Country Club,” that’s a group that get together to concentrate on developing business from a particular area or a particular group of countries. These people are all committed to working in the GCC, and part of this commitment involves them being trained around cultural awareness, what sorts of travellers there are here and what their needs are. Basically they’re all able to provide Halal food, they’re all aware of what food needs are, and each of the people here like the hoteliers and the incoming tour operators are all briefed and aware of what the GCC  travellers needs.

So are there specific hotels that serve Halal foods or are they just aware of the need and can cater to Muslim travellers should they require it?

Simon: Yes, exactly they don’t serve it as a daily item on their menu, because there isn’t a big demand but they would know if there are visitors coming from this part of the world and they’d be very well equipped to delivering whatever they need. I mean we’ve brought groups in the past and actually what they say to us is that they don’t necessarily want Halal food because we have a very big seafood offering, and there are good vegetarian options as well. But they’re able to do it if that’s what is required.

Amanda: One of the members of the Country Club is the Merrion Hotel, and the UAE Ambassador was living at the Merrion for over a year, around 18 months or so. He only just moved out so that’s just another example of a hotel where Halal food is definitely going to be on the menu and it will be catered for. As long as the hoteliers know who’s coming and what their requirements are then we can cater for them.

What are the main attractions for families in Ireland?

Simon: The most attractive thing about Ireland is the welcome and the friendliness. It’s a very family friendly place and we pride ourselves in making people feel welcome and safe. Safety is an issue particularly with families and the environment in Ireland is very inviting because of its safety. It’s very easy to get out of the towns and cities and into the countryside and that’s what a lot of our visitors like. We have really beautiful beaches, a lot of access to farms and animals and that’s always a big attraction for families. It’s a more natural product for families, we don’t have big Disney like attractions, it’s a much more authentic and natural experience. It’s about the countryside, it’s about walking and cycling and it’s all very well setup for families, there’s lots of short looped walks or looped cycle rides and its very much about that outdoor experience that people really like.


Is there any place you would specifically recommend for families?

Simon: Any of the coastal resorts are a good option. It’s the place where a lot of Irish families take their holidays as well, so what I think it’s nice that people are actually on holiday with Irish families. The beach plays a big part in attracting people to the coastal resorts. We don’t have the weather that you have here so it’s a nice place for people to walk around and get out and about.

Amanda: I think a very big attraction is also the Giant’s Causeway which is a natural attraction on the coast. There’s a new visitor centre opening in the summer of this year.

Simon: There’s also the Titanic experience opening in April. It’s the 100th anniversary of the Titanic, it was built in Belfast. The visitor centre is going to be very attractive there’s a ride it’s not just about seeing what happened but they’ll be recreating the smells and the sounds of the ship being built. You can get inside and there are mock ups of the cabins and the interiors. For kids of all age it’ll be a lovely experience. There’s an oceanography centre where they’ll be beaming live form the wreck, from the bed of the Atlantic Ocean, as well as lots of underground projects. There’s a science area as well that’s very attractive for kids and families.
There are smaller attractions as well, for example in Dublin there’s the Dublinia a very family orientated sort of place, it’s about the history of Dublin done in a very attractive sort of way. It’s  about the Vikings foundations.
There’s also a Leprechaun Museum, the mythical creatures that are very attractive for kids. There’s lots of things for family to do but we don’t necessarily position Ireland as a kind of theme park destination it’s more of an authentic experience.

Ireland recently allowed Gulf citizens with UK visas to enter Ireland without an Ireland visa – is this scheme bringing in additional tourists? And are there any plans to expand this program to all Gulf resident visa holders as many expats in the GCC travel abroad on holiday and would be encouraged to include Ireland in their itinerary – particularly when they are visiting the UK.

Simon: It’s based on nationality rather than their residence visa status. So if they’re Indian nationals or Chinese nationals they’ll get a UK visa and be allowed to come to Ireland as well. It’s not specific to where they are just to what passports they’re holding. I don’t think we have plans to allow residence visa holders to automatically be allowed, it will just be based on nationality. It was setup by nationality not by place of residence because we want to know where they are originally from rather than where they’ve been living.
We would like it to work the other way round, where you get an Irish visa and you are allowed to travel to the UK. We’re in discussions around the whole visa regime because the UK and Ireland have a common travel area so if you live in either you can pass freely between the two. If you’re a UK citizen you can. So we’d like that to be extended, we’re in discussions because there are lots of issues, not just tourism related but around immigration and security so we are working on that but there’s no immediate approval been given.

Are Schengen visa holders eligible to travel to Ireland? Why not?

Simon: We don’t recognize Schengen, again because UK and Ireland have a common travel area and the UK isn’t in Schengen so Ireland isn’t in Schengen.  I don’t foresee it happening anytime in the future either.

Check out the city guide for Dublin, Ireland on Irhal here!

Victoria Peak is at 550 m above sea level and as such offers breathtaking views of both the Hong Kong Island and the Kowloon area along with the Harbor. It is a must visit both during the day and at night. The main view point is on the roof of a shopping mall even though the actual peak is to the west. There is a lot of entertainment on the Peak as well as some great eateries. Tram rides to the Pe...