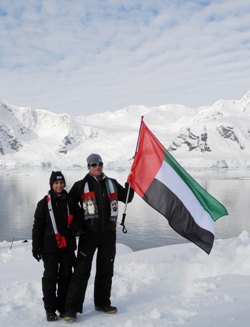 After a tiresome 20-day trip travelling to the South Pole and witnessing first-hand the effects of climate change in Antarctica, Dana Al Hammadi has now returned to tell her story to the UAE, in a bid to spread awareness of sustainability.

Dana, an Etisalat employee and mother of five children, was the only Emirati female in a 65-strong group which consisted of entrepreneurs, valued members of society, teachers, journalists, disadvantaged students and environmental experts from around the world to explore the depths of the South Pole.

From Abu Dhabi, Etisalat sponsored her journey which took her to Sao Paulo then Buenos Aires, and then to the southern-most city in the world, Ushuaia, followed by a lengthy two-day (about 900 nautical miles) sea trip in one of the world’s roughest waters to eventually reach Antarctica. The group then spent a number of days visiting breathtaking locations and experiencing the local wildlife first-hand.

Dana said she was inspired to go on the trip after attending a workshop by Robert Swan, a Polar Explorer dedicated to the preservation of Antarctica.

“After attending one of Robert’s conferences, and after hearing stories about Sheikh Abdul Aziz bin Ali Al-Nuaimi’s travels in the previous year, I was determined to go on the expedition the following year and to represent Etisalat and the UAE,” Al Hammadi said.

During the trip, Dana witnessed some emotional scenes, where she noticed the effects of climate change first-hand, with glaciers falling down and water levels rising, as well as the impact it had on local wildlife.

Dana says the trip has reinforced her belief in the importance in sustainability and she is now more determined than ever to spread the world.

“I am going to start new education and awareness campaigns in the UAE. I believe the youth are the most important group to target; because if we teach them now, they can learn to be environmentally-friendly for the rest of their lives. It is future generations who will be particularly affected by global warming so I will be going to schools in the UAE to tell them about my experience and show them photos of the local habitat and encourage them to adapt a greener lifestyle,” she said.

“Like other countries, the UAE has a high carbon footprint, so it is our duty to start making life changes today. We need to start looking at alternative sources of energy now. Every person should set a target for themselves, a goal to achieve,” Dana continued.

What next for the Emirati explorer? She aims to continue to spread the world, encouraging her local friends, colleagues and relatives to play a part. Dana believes the trip has reinforced her belief in the importance of sustainability and she is now more determined than ever to spread the word.

“I want to do something nobody has done before, to challenge myself, and to represent the UAE,” Al Hammadi concluded.

CORRECTION: Dana al Hammadi is the second female Emarati to reach Antarctica. In December 2007 Noor alFalasi went on a trip to Antarctica with her brother Jamal and a group of sixty international students. Sorry Noor! Thanks to the anonymous reader who pointed this out to us. Editor

the river Spree divides Mitte into North and South sections and in the middle of it is the grandiose Museum Island, holding about 20 galleries and museums that will definitely leave you reeling. Do some research before going and decide which ones you want to see most. Each has admission fees (except for special days such as Lange Nacht der Museen and the first Sunday of every month, when entry is ... 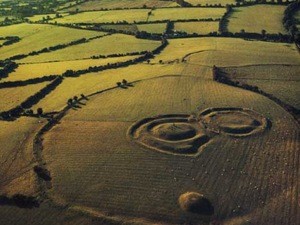 The Hill of Tara is an important archaeological site about 60km north of Dublin in County Meath.  Once upon a time (before the Norman invasion in 1167), it is believed this was the seat of the kings of Ireland.  Whether this is true and how important the site actually is are still up for debate.  The hill itself rises 197m over the Irish countryside. There are around 30 monumen...

This commercial skyscraper is the second tallest building in Saudi Arabia (after the Kingdom Center) and is located in the business district of Riyadh. It contains a shopping center with international brands at its base and a viewing deck on higher floors, as well as a luxury hotel and numerous restaurants. The tower is most famous for the glass globe near its summit. ...