Emirates refuses to publish this ad in their inflight magazine 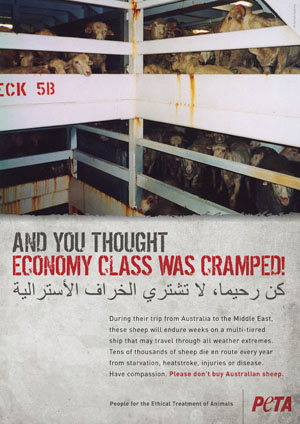 Dubai – People for the Ethical Treatment of Animals (PETA) Australia had hoped to place a full-page ad highlighting the animal suffering associated with live-sheep imports in Open Skies, the in-flight magazine of the airline Emirates, but the airline has grounded the idea. The ad shows sheep crammed together aboard a ship and reads, "And You Thought Economy Class Was Cramped!", in both English and Arabic. The ad goes on to describe the abusive conditions under which sheep are exported from Australia to the Middle East and how thousands of animals suffer and die en route. PETA is asking Gulf states to refuse to purchase live imported animals. Unfortunately, the publishing team for Open Skies told PETA, "Emirates does not allow us to carry these type of artworks".

"There is no humane way to ship tens of thousands of sheep who are jam-packed into stalls and mired in their own waste", says PETA spokesperson Nadia Montasser. "Emirates has a highly esteemed economy class, but even flying in the cargo hold would be luxurious compared to what these sheep have to endure. Anyone who purchases these hideously abused animals is fuelling the notoriously cruel live-transport industry."

Sheep transported to the Middle East from Australia are packed tightly together on enormous, multi-tiered ships, where crowded conditions cause many of the animals to be trampled to death or to starve when they cannot reach food and water troughs. Sheep are confined amid their own waste in extreme heat on ships that hold up to 125,000 animals. PETA is calling for an immediate end to the export of live animals from Australia.

According to Islamic law, animals slaughtered for food should not be cruelly handled or transported and should receive adequate food and water. "If animals have been subjected to cruelties in their breeding, transport, slaughter, or in their general welfare, meat from them is considered impure and unlawful to eat (haram)", said the late Imam BA Hafiz al-Masri. "The flesh of animals killed by cruel methods (Al-Muthiah) is carrion (Al-Mujathamadh). Even if these animals have been slaughtered in the strictest manner, if cruelties were inflicted on them otherwise, their flesh is still forbidden food (haram)". 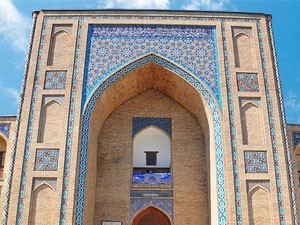 Kukuldash Madrassa is a Quran school built by the poet and scientist Kulbobo Kukeldash during the reign of Abdulla-Khan in the 16th Century. It is one the largest and best preserved Quran schools in Central Asia. ... 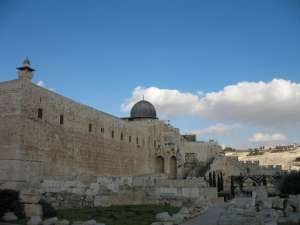 This is a significant archaeological site since the remnants of the old city wall which stretches for about 40 meters dates back to a time when the Chinese people of Shanghai sought to protect themselves from Japanese attacks around the mid- 16th century. Located nearby is a small museum showcasing life in the old city of Shanghai and giving a glimpse of the history of this city.  Tim...

The Kowloon Walled City Park is a beautiful lush park where both tourists and residents go to unwind and find peace from all the chaos of Hong Kong.  ...