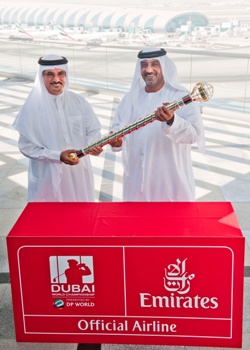 Dubai, U.A.E., 11th October 2010 - The European Tour and Emirates airline have teamed up for the golf season's grand finale - the Dubai World Championship, which will see every member of Europe's triumphant Ryder Cup team line up to contest the $7.5 million (Dhs 42m) prize fund.

The Dubai-based international carrier will be the Official Airline of the climax to The Race to Dubai from 25th to 28th November, with defending champion Lee Westwood, as well as the 12 Ryder Cup heroes, among the all-star field.

The tournament at Jumeirah Golf Estates' Earth course will see Europe's triumphant team reunited for the first time since their famous victory and brings the curtain down on the second Race to Dubai, which comprises 48 tournaments played in 26 different destinations across the globe to decide who will be Europe's number one player for 2010.

The world-class field will feature the leading 60 golfers on The Race to Dubai at the conclusion of the UBS Hong Kong Open, including three 2010 Major winners - Open Championship winner Louis Oosthuizen, US PGA Champion Martin Kaymer and US Open Champion Graeme McDowell.

With the addition of the Dubai World Championship to its golf sponsorship portfolio, Emirates supports nine European Tour tournaments, including The Ryder Cup, which also featured the airline's sporting ambassador Colin Montgomerie, Captain of the European Team.

Emirates will be part of the three tournaments that count down to the Dubai showpiece - the WGC-HSBC Champions in China, the Barclays Singapore Open and the UBS Hong Kong Open, which tees off just a few weeks after the airline launched its flagship A380 service to the city.

Emirates will be flying in many of the players to the UAE, as well as spectators from around the world, and HH Sheikh Ahmed bin Saeed Al-Maktoum, Chairman and Chief Executive, Emirates Airline and Group, is delighted to be involved with the event which attracted more than 59,000 spectators in its inaugural year, as well as reaching over 350 million television viewers worldwide.

Sheikh Ahmed said: "The European Tour stages tournaments at many of the 25 destinations on our European network, as well as at a number of the 80 other locations we fly to across the globe, so it really is a perfect fit for Emirates.

"Having already joined forces with The European Tour for The Ryder Cup, and taking into account the tremendous success of the first Dubai World Championship in 2009, the benefits of extending our relationship were clear.

"We already sponsor a number of tournaments on The Race to Dubai schedule so it made sense for us to become involved with the final event of the season, especially with it being held at our home base.

"The Dubai World Championship is a spectacle of sport followed by millions around the world and - as well as thrilling spectators both here and on TV - it will consolidate Dubai's status as a venue capable of hosting major international sporting events.

"Emirates has a great affinity with golf and it is exciting to be strengthening our commitment to the sport further by supporting a tournament which will bring the world's finest players to Dubai."

European Tour Chief Operating Officer Keith Waters is also delighted by the benefits of the partnership.

He said: "Emirates is a true global brand based in Dubai and their confidence in the Dubai World Championship, as a committed commercial partner, enhances the profile of the event and The Race to Dubai on The European Tour. We are proud to have the tournament as part of Emirates' impressive global golfing portfolio."

In addition to the Dubai World Championship, WGC-HSBC Champions, the Barclays Singapore Open and the UBS Hong Kong Open, Emirates is the Official Airline at four other events on the 2010 European Tour International Schedule - the Austrian Open, Avantha Masters (India), Malaysian Open and the BMW International Open (Germany).

As well as being the Official Airline of The 2010 Ryder Cup at The Celtic Manor Resort in Wales, it will be the Official Partner of the European Team in 2012.

Situated in the vaults underneath the Royal Palace, The Royal Armory Museum is truly a historical treat. The museum’s collection spans over 500 years of royal history replete with sagas of love and murder, weddings and death, victory and defeat. While at the museum, you can enjoy everything, from royal costumes, weapons, armors and carriages to preserved stomach contents of conspirators and assass...