Dubai Hotel Room Inventory Will Increase 40 Per Cent In 2010

Dubai’s hotel room inventory will reach 54,000 in 2010 according to Ishraq Gulf Estate Holding, a leading regional hospitality figure.  This represents a 40 per cent increase over figures for 2008.   CEO for Ishraq Gulf Estate Holding said the huge increase in hotel rooms will present a challenge for the hotel sector, which has been struggling during the global economic recession.

Sami Ari Ansari said 2009 has been an extremely difficult year for the hospitality industry in Dubai because room inventory increased 17 per cent and this drove the occupancy rate down 35 per cent compared to 2008.  Ansari is a member of the Arabian Hotel Investment Conference (AHIC)’s advisory board.  He said “Signs of improved demand for the remainder of 2009 are evident, nevertheless pressure continues on room rates as a result of fierce competition.”

This “bait” (house) was converted into a museum in 2006, and now showcases the history of the city of Muscat and of Oman dating back to pre-historic times. The interactive exhibits are both interesting and educational and international collections are frequently on display here. One of the museum’s most unique features is the dinosaur bones on display, which were excavated in Al Khoud near Muscat.... 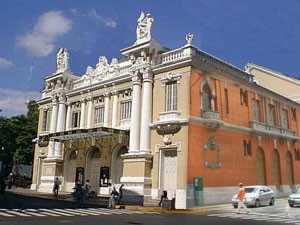 Also known as the Municipal Theatre, this public amenity is a splendid work of art in itself. Since its first live performance in 1881, an opera that received national recognition, the theatre has successfully continued to lure music and art lovers to its rather commendable performances. The interior is ornamented in tones of opulent luxury, with velvets and fine silks and an added sprinkle of ...

The Grande Bibliotheque is the largest library in the French-speaking world.  It was built between 2001 and 2005 and cost nearly $100 million.  The five-story building is a magnificent example of modern architecture.  The façade consists of copper strips in front of massive panes of glass.  In addition to the books, the library is home to a sculpture garden and several intere...