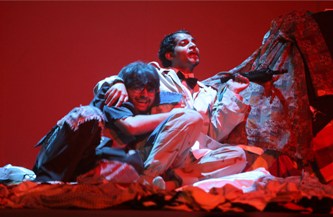 The Dubai Culture & Arts Authority (Dubai Culture) will host the fifth edition of Dubai Festival for Youth Theatre (DFYT) from Oct. 1 to 10, 2011.
DYFT is a one-of-its-kind initiative held under the patronage of His Highness Sheikh Majid Bin Mohammed Bin Rashid Al Maktoum, Chairman of the Dubai Culture, to promote youth theatre talent in the UAE.
The festival focuses on promoting Emirati and Arab theatre artists and enthusiasts by providing a dedicated platform to showcase their talent in addition to sharpening their skills through critique sessions led by experts.

For Children Only
Hatta Society for Arts and Culture
Date: 11 October 2011
Written by: Talal Mahmoud
Directed by: Marwan Abdullah

Located at the very edge of Paris city proper, just inside the Boulevard Periphérique, the Parc de la Villette is one of the city’s newest.  It was built between 1984 and 1987 as part of an urban redevelopment project on the site of Paris’ old slaughterhouses and meat market.  The park is notable for its unique architecture and is one of the best places in the city for kids.   There are ...

Sherlock Holmes and Doctor John H. Watson lived at 221b Baker Street between 1881-1904, according to the stories written by Sir Arthur Conan Doyle. The 1st floor study overlooking Baker Street is still faithfully maintained for posterity as it was kept in Victorian Times. Now you can step back in time when you visit the Official Home of Sherlock Holmes!   The room is filled with plenty of...