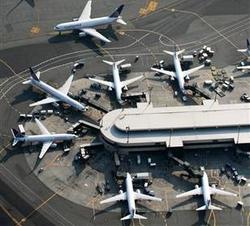 CHICAGO and HOUSTON - In an agreement intended to address the United States Department of Justice's concerns related to Continental's proposed merger with United, both airlines have agreed to lease 18 pairs of take-off and landing slots (roundtrip flights) during peak and off-peak travel times and certain related facilities to Southwest Airlines at Newark Liberty International Airport.

"We think this would be a fair solution that would allow Continental and United to create an airline that will provide customers with an unparalleled global network and top quality products and services, while enhancing domestic competition at Newark," said Jeff Smisek, Continental's chairman, president, and CEO.

Continental and United currently operate 442 daily roundtrip flights into and out of Newark Liberty. The leasing of the first of the 18 daily slot pairs will begin in late March 2011 and the leasing arrangement will be fully implemented in June 2011.

United and Continental will continue to serve all the communities both airlines currently serve. Since the slot pair transfer is expected to have minimal impact on combined carrier's route network, United and Continental are not changing the previously announced synergy estimates of the merger.

The Giant Sky Wheel is one acclaimed as one of the largest ferry providing service in the Southern Hemisphere. Situated adjacent to the Federation Square the ferry service becomes operational from the Birrauang Marr at the edge of the Yarra River. The view is extremely panoramic especially during the night time when the illuminating lights provide a completely different look to the city of Melbour...