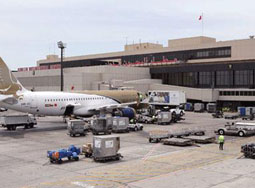 July 12 - Plans for the expansion of Bahrain International Airport are expected to be ready next month.

The Chairman of the Board of Directors of the Bahrain Airport Company, Kamal Ahmed, stated that the French firm ADPI will complete the main expansion plans by August and tenders for engineering designs will be announced soon after that.

The French firm has been tasked with creating a comprehensive development plan for the airport which is to include new halls for passengers. It is also working on an Airport City project which is to be carried out over the next 30 years. This plan will include the building of a new traffic control tower and cargo facilities, a VIP lounge, as well as new roads and train lines connecting to the airport.

The expansion plan will include the building of 110 hangers, 87 boarding gates and 7 air bridges. The airport currently only operates 25 hangers.

The distillery district was founded in 1832 and is therefore rich in history. This 45 building complex belonged to Canada’s largest distilling company in Victorian times and includes a wind mill, grain mill and the red-brick mill buildings. The Historic Distillery District holds events all year round- including a blues festival, jazz festival, and an outdoor art exhibition Admission: Free ...

This twin-towered fort, which sits atop a gigantic rock, was built in the 1580s when Muscat was occupied by the Portuguese. It served as a bastion to protect the harbor from invaders and also served as a prison for many decades. It is currently a museum showcasing Omani culture, history and heritage. It is not, however, open to the general public. Only foreign dignitaries and heads of state are al...