The Road and Transport Association (RTA) announced the completion of the Dh 11 million dollar Marinas Project. The Marinas Project runs on both sides of the creek and is in the vicinity of the Floating Bridge. The project is intended for Dubai Police rescue operations, use by the Dubai Golf Club, Al Boom tourist village, and visitors to the Creek Park. Mattar al Tayer, Chairman of the Board and Executive Director of the RTA said “This project is part of RTA’s efforts to facilitate the smooth operation of Dubai Police Marine Rescue Patrols and support the deployment of marine rescue teams 24 hours a day.” The Marinas Project has a special dock for the Dubai Golf Club and Al Boom Tourist Village capable of accommodating 17 boats up to 34 meters in length. 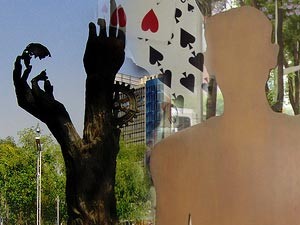 A walk along this pleasant avenue would reveal the true diversity within such a complex metropolitan district – from the quiet, ancient residential blocks to the towering, glowing buildings, and businesses that have recently sprung up, lending a different touch of color and taste to a secluded aspect of colonial architecture. ...

Fraumünster, or Church of Our Lady, is one of Zurich's most important churches.  The original church was opened in 850 and served as a Benedictine Abbey.  The convent here was home to many of the elite women of Medieval Germany.  The crypt dates from this original building.  The current church was built in the mid-thirteenth century and a Romanesque spire was added in 1732.&nbs...