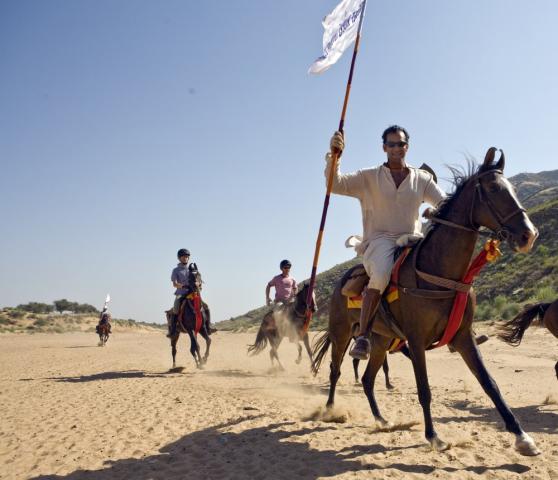 Relief Riders International (RRI), an adventure travel company that leads relief missions on horseback through the Thar Desert of Rajasthan, India, has made the top 10 list of finalists for the 2010 United Nations NGO Positive Peace Awards.

The award recognizes organizations that are contributing time and money to make a difference in the world through their support of local, national, and international NGOs and nonprofit organizations.

Though best known for organizing relief missions on horseback to some of India’s remotest desert communities, Relief Riders International has created a way for even stay-at-home volunteers to help fight hunger in these regions: the Give a Goat program.

Through the program, anyone can donate a live goat — whose milk and cheese provide a steady food source for dozens of villagers — for the nominal cost of US$75. According to UNICEF, 48 percent of children in India under the age of 5 are suffering from malnutrition. A single goat can go a long way to helping a family.

Though the donations can be made all year round, the holiday season, when RRI is gearing up for its annual relief rides (in December, January, and February) is an especially good time to give. It is during these relief rides that the donated goats are presented to villagers in Rajasthan.

“It’s extraordinary to see what a huge difference a single goat can make in these communities,” said RRI’s founder and executive director, Alexander Souri. “Each goat we deliver can produce enough food to feed a family. It’s very humbling to see how gratefully these gifts of sustenance are received.”

For those who would like to ring in the New Year by directly participating in the relief mission and personally hand over goats to people who can really use them for sustenance, more information can be found on the RRI website www.reliefridersinternational.com .

Relief Riders International’s award-winning relief rides combine adventure travel and humanitarian aid, and have been featured in magazines including Outside, Forbes, National Geographic Adventure, and O — The Oprah Magazine.

The organization’s 2011 relief rides are scheduled for the following dates:

There are lots of fun activities to do with children in Jakarta such as: Taman Impian Jaya Ancol (Ancol Dreamland): It's located in the northern coast of Jakarta, just few minutes from famous shopping  Mangga Dua area and about 20 minutes drive from city center. The bus terminal is located on site as well and tourists can arrive by bus and get off at Dunia Fantasi theme park. Start by v...

The United Center is hallowed ground for basketball fans.  It was here that the legendary Michael Jordan finished his career.  He actually began his career and accomplished his first three-peat across the street at the beloved Chicago Stadium, which has since been demolished.  The United Center opened in 1994, just in time for the Bulls' second three-peat.  It is the largest ar...

Ferrari World Abu Dhabi is the world’s largest indoor theme park and the world’s first Ferrari themed park. As with most things in the UAE, it is the largest attraction of its kind. It is an intense multi-sensory experience and a must-visit for families, fans and enthusiasts. The Park offers more than 20 Ferrari-inspired rides and attractions, including a wide array of rides for adults and childr...