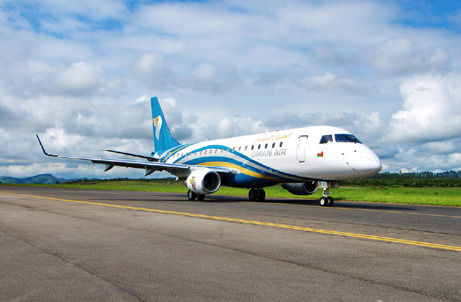 Oman Air has unveiled the latest addition to its fleet, the EMBRAER 175, at a ceremony held at Muscat International Airport, where invited special guests, trade partners and  journalists got a chance to see the interiors of the brand new aircraft.

Oman Air is now the proud owner of two Embraer E jets, which will be deployed to the regional routes that Oman Air flies to. The deal was originally announced in November 2009 and includes firm orders for five EMBRAER 175s, plus options for another five aircrafts.

“The E-Jets are the ideal platform from which we can expand our regional route network and better align frequency with demand”, said Salim Mohammed Al Kindi, Chief Technical Officer and the Acting CEO of Oman Air.

“Having this flexibility allows us to introduce more point to point routes currently not sustainable with larger aircraft, as well as upgrading our services to domestic destinations like Khasab and the other new airports currently being developed within the Sultanate of Oman.”

With passenger demand for regional travel on the increase, pressure has increased for regional jets to carry more passengers more frequently to nearer destinations. Oman Air’s brand new Embraer E175s - part of an efficient, 70 to 100 seat family of aircraft that has not existed until relatively recently - are able to meet that demand.

Embraer S.A. is the world’s largest manufacturer of commercial jets up to 120 seats, and one of Brazil’s leading exporters. Embraer’s headquarters are located in São José dos Campos, São Paulo, and it has offices, industrial operations and customer service facilities in Brazil, China, France, Portugal, Singapore, and the United States. Founded in 1969, the Company designs, develops, manufactures and sells aircraft for the commercial aviation, executive aviation, and defence sectors. The Company also provides after sales support and services to customers worldwide.

“We are convinced that the E-jets will bring positive value for Oman Air on its regional network,” said Paulo César de Souza e Silva, Embraer Executive Vice President, Airline Market.  “Defining itself as a ‘boutique airline’ in the Gulf area, Oman Air will be offering its customers optimum comfort with the EMBRAER 175.”

He added:
“At Embraer, we continually analyze the industry’s performance and interpret trends to  understand the future need for aircraft, the markets in which they are deployed, and the economic motivations that drive passenger demand. Today’s shifting market dynamics led us to the principle of fleet capacity optimization and The Rule of 70 to 110. Applied correctly, The Rule helps airlines achieve operating efficiency without compromising performance or passenger comfort. The EMBRAER 170, 175, 190, and 195 are a new-evolution family of aircraft, each engineered from the ground up to be comfortable, efficient, and cost-effective. From the earliest planning stages, our engineers understood the need for a new platform, an airframe created specifically for the 70 to 110 seat segment. The result incorporates new technology on the flight deck and proven design elements in the cabin, making the new airframe both pilot and passenger friendly.”

InsideOman Air’s EMBRAER 175 will be configured with 71 seats, in a dual-class layout, with 11 seats in business class and 60 in economy.

Oman Air also signed the Embraer Pool Flight Hour Program service contract for the new aircraft. Embraer’s Pool program quickly provides replacement parts and eliminates the need for inventory investments, via an agreement in which the customer invests an agreed sum, based on the number of flight hours of the aircraft enrolled in the program, against the support needed at any point in time. Embraer assumes the responsibility for maintaining a parts inventory at its distribution and service centres, in order to provide parts to operators as soon as they are requested.

The Embraer 175s are the latest aircraft to join Oman Air’s rapidly-expanding fleet and follow deliver of six Airbus A330s since October 2009. A further A330 will be delivered later this year. The fleet now consists of 15 Boeing 737s, six Airbus A330s, two Embraer 175s and two ATR 42s. In addition, six Boeing 787 Dreamliners are expected to be delivered from 2014. Parallel with Oman Air’s fleet expansion has been the growth of its route network, which now includes 40 destinations, as well as the airline’s home base of Muscat. Further destinations are due to be unveiled this year.

Place Mohammed V was originally known as Place de France when it was laid out in 1920 after which it was called Place des Nations Allies after WWII.  This magnificent square is undoubtedly the heart of the city.  It is in fact the seat of the administrative centre of Casablanca. It has the post office, Palace of Justice, the French Consulate and the bank of Morocco all set around a centr...

The StarDome Observatory has an area for Maori archaeological site.          ...