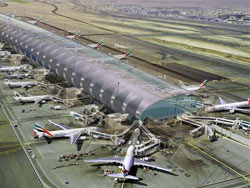 June 4 - Dubai Airports Company that operates Dubai International Airport has announced that it will ban all older aircraft from October 31 in a bid to reduce noise and emission pollutions.

The company will withdraw older generation aircrafts that do not conform to international noise and emission standards set by the International Civil Aviation Organisation (ICAO). "ICAO classified Chapter 1 and 2 aircraft will be banned from operating cargo flights at Dubai International from October 31, 2010 and passenger flights effective March 27, 2011 consistent with the International Air Transport Association's (IATA) seasonal schedule change,” said a statement issued by the company.

These aircrafts will be allowed to operate at the Dubai World Central-Al Maktoum International airport till April 1, 2012. "Limiting noise and emissions is critical to the long term sustainability of aviation," Paul Griffiths, Dubai Airports CEO, said.