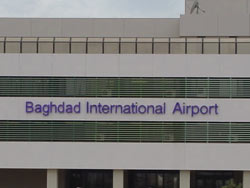 April 8 - Baghdad International Airport was closed Wednesday morning for unspecified reasons, airport checkpoint staff and officials said.
Staff controlling checkpoints refused entry to all passengers and were only allowing airport staff through security checks.
Security and airline officials gave differing accounts for the reasons behind the closure.
A spokesman for Iraqi Airways said the airport was closed for "technical reasons" without elaborating, and said it would be re-opened in the afternoon.
An official in Baghdad airport's operations room, however, put the closure down to "security reasons", again without giving details, and said it would re-open at 3:00 pm (1200 GMT).
Baghdad has been hit by two sets of apparently coordinated bombings since Sunday, killing more than 60 people in total and wounding more than 300.
The US military, which has a large base adjacent to the airport, did not immediately respond to requests for comment.

Isfahan is not a city geared specifically towards children. The air around the city is formal, sober, and one of intellect and reverence rather than frolic and merrymaking. The lack of amusement opportunities within the city is somewhat of a downside when you are bringing along a family with toddlers. The only best place you can take children is probably one of the numerous parks around the city. ...

A large central park located in Condesa. Must-visit for a leisurely stroll at least once on every visit to the city – just lifts the stress right off of you. The main public square within the park has regular live performances by musical bands. Stalls selling all kinds of domestic clothing and handicrafts are frequently set up, and haggling is very common.   ...