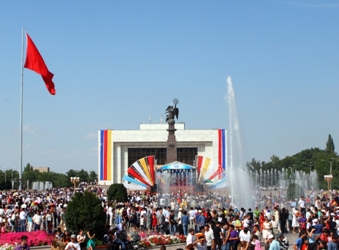 Dubai, UAE; 10 January 2012: Bishkek has been named as flydubai’s 50th destination, marking the pioneering airline’s entry into the Kyrgyz Republic and expanding its global network to 28 countries across the GCC, Middle East, Africa, Indian Sub-Continent, Asia and Central and Eastern Europe in just two and half years of operations.

The new service, which is due to begin on 7 February 2012, makes flydubai the first UAE airline to offer direct flights between the Emirates and Kyrgyz Republic. Flights will operate twice a week, departing Dubai on Tuesdays and Fridays, with flights from Bishkek to Dubai leaving on Wednesdays and Saturdays. One-way fares start from AED 990.

flydubai CEO Ghaith Al Ghaith said: “We are proud to launch our latest services, bringing our destinations in the former Soviet Union to 12. It is also a significant milestone for us as the 50th destination we have announced – quite an achievement since our first flight in June 2009.

“We have already launched operations to a number of cities in Central Asia and we believe Bishkek will be just as well received. We are confident it will prove popular with people seeking alternative travel destinations, as well as offering people in the Kyrgyz Republic a gateway to the Middle East, the Indian sub-continent and Africa through the flydubai network.”

The capital and largest city of the Kyrgyz Republic, Bishkek is flydubai’s first foray into the Central Asian country and marks the continued rise in demand for flights to previously under-served destinations in Central Asia.

The Kyrgyz Republic has opened its economy to foreign investment in key industries including metallurgy and is developing its tourism potential. Beauty spots such as Issyk Kul Lake are growing into popular tourist destinations while trekking and camping trails as well as skiing bases are developing all over the country, drawing in travellers locally, regionally and internationally.

The Kyrgyz Republic has a growing presence in the UAE thanks to a 3,000-strong expatriate population. Flights to Bishkek will start from February, ensuring they are able to travel home to visit friends and family more often.

Flights to Bishkek will operate twice a week on Tuesdays and Fridays from 7 February 2012. Flight FZ771 is scheduled to depart Dubai Terminal 2 at 2255, landing at Bishkek International Airport at 0500hrs local time. The return flights leave on Wednesdays and Saturdays, with FZ772 departing at 0620hrs, arriving in Dubai at 0845hrs. One way fares from Dubai to Bishkek start at AED 1,055 and fares from Bishkek to Dubai start at AED 1,020.

Fares include 20kg checked baggage plus one piece of hand luggage weighing up to 7kg and one small laptop bag or hand bag. A seat with extra legroom costs AED100 extra.

Flights between Dubai and Bishkek can be purchased from flydubai’s website, its call centre (+9714 231 1000) and through travel partners.

It is one of the upper-income northern suburbs of the city with a wide range of second hand bookshops, antique dealers, body piercing salons and pavement cafes. It also has several Bed and Breakfasts and guesthouses which are very popular with tourists. ...

Europe’s largest leisure, water park, the Aqua Zone has a bit of everything for people of all ages but even more so for children. If you and your children enjoy water adventures and thrilling rides, then this water wonderland is the right place for you. Rides include the Master Blaster (a water roller coaster), wave pool and the Flow Rider among others. Children under 4 get free entry. Timin...