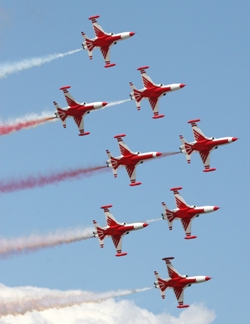 One of the world’s leading military air force display teams, the Turkish Stars, is the latest aerobatic squadron to confirm its attendance at the 2011 Al Ain Aerobatic Show. The Turkish Stars will demonstrate their amazing airborne skills for the very first time in the UAE when they take to the skies above Al Ain International Airport from February 2-5.

The squadron features formations of up to nine F-5 fighter jets piloted by the Turkish Air Force’s 134th Acroteam Squadron Command, which has performed in hundreds of sensational displays around the world. The Turkish Stars are the only national aerobatic team to fly with formations of eight supersonic aircraft, and in 2001 they sealed a world record by performing to an audience of over 1 million people at an aerobatic show in Azerbaijan.

“Turkish Stars have an outstanding pedigree for entertaining spectators and displaying truly remarkable skills and execution,” said Faisal Al Sheikh, Events Manager, Abu Dhabi Tourism Authority (ADTA), which organises the Al Ain showpiece in conjunction with the UAE Armed Forces. “Spectators are guaranteed a dazzling exhibition of aerobatic arts when the team flies above Al Ain in February. By joining some of the world’s best display teams, they will help the Al Ain Aerobatic Show to raise the benchmark for world-class spectacles in the Middle East.”

Now in its ninth year, the show has become firmly established as one of the world’s top five aerobatic events. Pilots from over a dozen of the best formation teams on the planet will visit the Oasis City to manoeuvre their agile aircraft over four days, in front of expected record crowds of some 130,000.

Taking centre-stage at the 2011 event will be the unique, multi-discipline FAI Desert Challenge. Arranged by the Fédération Aéronautique Internationale (FAI), the international governing body for air sports, the Desert Challenge will see six of the world’s best pilots flying CAP232, Sukhoi 26 and Xtreme aircraft in classic and free-style competition formats.

Spectators at the Al Ain Aerobatic Show will be treated to a wealth of death-defying stunts featuring wing-walkers, subsonic jets and choreographed “dancers in the sky”. The Turkish Stars and FAI Desert Challenge participants will also be joined by the four Hawker Hunter supersonic fighter jets of Team Viper, which will be performing their amazing mock ground formation attack scenario for the first time in the Middle East.

Making their Middle East debut will be the Baltic Bees from Latvia, flying L-39C Albatros twin-shaft jets at speeds topping 900 km/h. Miss Demeanour, a mark F.4 XF947 Hawker Hunter that was built for Britain's Royal Air Force in 1956, returns for a second consecutive year to thrill the spectators.

ADTA is significantly expanding the spectator village for 2011 to make it the largest to date. Among the wide range of activities on offer for all the family will be karting, model aircraft displays, a hot air balloon and VIP flights, while a greatly improved selection of F&B outlets will cater to every taste.

Daily tickets for the show are Dh40 per adult and Dh25 for children between three and 10 years old, while children under three enter free. Visitors can check the website for details on how to purchase tickets – www.alainaerobaticshow.com.  And by accessing the Al Ain Aerobatic Show’s official web site, www.alainaerobaticshow.com, one lucky enthusiast will also have a once-in-a-lifetime chance of winning a

The Souk Al Tayeb is Beirut’s first farmer’s market and is a great place to get a feel for the city. Every Saturday, residents and visitors converge at this open-air market.  Organic fruits and vegetables, traditional dishes, flowers, and much more are available. This souk brings everyone together and serves as a meeting place for producers, bankers, farmers, and housewives. It’s a platform for di...

Visiting Maldives, one of the most exciting tourist attractions is the National Museum. An old palace building in the Sultan Park has been converted to house the museum. A large collection of historical objects are on exibit at the museum that portrays the rich past and cultural legacy of Maldives. The museum has on display numerous objects belonging to the Sultans. The vast collection compr... 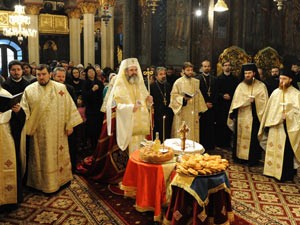 Hidden behind a web of greenery, this Orthodox Church is small yet has a very powerful structure. The main complex is paired with a small white tower to make it recognizable. The church is visited often by the locals on Sundays and for special ceremonies.                     ...