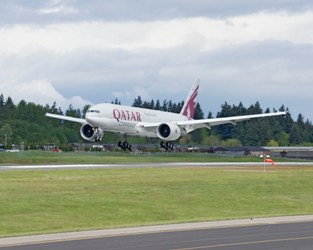 The new twice-weekly services will be operated with Qatar Airways’ new Boeing 777 freighters and will fly from the airline’s hub in Doha via Amsterdam. Payloads on the new services will be up to 100 tonnes per flight and are expected to include freight items such as machinery, textiles, auto parts, fruit and vegetables and general cargo.

“With the recent introduction of Boeing 777 freighters into our cargo fleet, we’ve wasted no time in developing new markets, and we’re especially pleased to be launching our first US cargo route to Chicago O’Hare, the busiest airport in the world.

The airline’s services to Hong Kong will be boosted to five times a week, effective 16 August, up from the initial three weekly flights which began only two months ago.

The Boeing freighter has the longest range of any twin-engined freighter, and is based around the B777-200 Long Range aircraft of which Qatar Airways has six in its passenger fleet operating the airline’s ultra long-haul routes to Houston, Melbourne, Sao Paulo and Buenos Aires.

Six further routes, to be launched over a four month period from October 2010, will take the airline’s passenger network to almost 100 destinations. The additions of Phuket (12 October), Hanoi (1 November), Nice (24 November), Bucharest (17 January), Budapest (17 January) and Brussels (31 January) will also present new markets for Qatar Airways Cargo to offer its expanding customer base.

Qatar Airways has 17 Boeing B777 aircraft in its passenger fleet with the delivery schedule for the full order of 32 B777s, including a total of three freighters, to be completed by the end of summer 2011.

In addition, Qatar Airways currently operates a modern fleet of 86 aircraft to 92 diverse cities across Europe, Middle East, Africa, Asia Pacific, North and South America. The airline has over 200 aircraft pending delivery with the orders worth more than US$40 billion.

The Art Institute of Chicago started as the Chicago Academy of Design and was founded by a group of 35 artists in 1866.  The academy was profitable, but struggled with financing.  The current building, built in the Neoclassical style, was built as an art gallery for the Colombian Exhibition and completed in 1893.  The museum and art school have continued to grow and expand ever si...